I was talking of graffiti in the High Arctic and its relation to history, exploration, etc.
So back home to New Zealand. 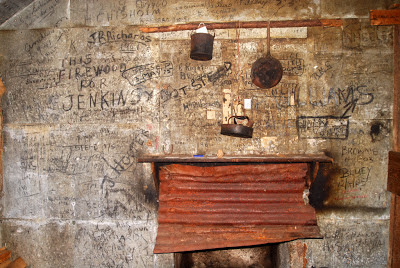 Now about high country huts here - I have a conflict here which I can't seem to resolve. My problem entirely. The above image is from a hut in the upper Mathias Valley not too far from the Main Divide. This hut is all but abandoned - the bunks are knackered and there is a newer hut across the riverbed a half hour tramp away. But it does provide shelter with an intact roof. But look at the walls. Many of these contributions go back to the 1930s, 1920s and beyond. It is great to stand there with your brew of tea and browse the history of the hut and the area - just like the hut books (which have a far greater risk of disappearing over time - through damage, loss, vandalism, fire, removal for archiving, etc). The remoter the hut the better the wall 'graffiti' I have found. 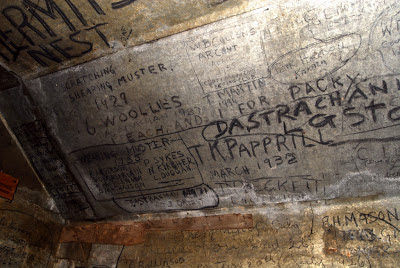 I was doing a solo tramp not too many years ago in the Harper/Avoca area of inland Canterbury and was about to bypass the earthquake damaged Triangle hut (1994 Arthur's Pass quake) when memories of a visit there as a nine year old lad with my Dad whilst we were visiting my big brother who was working for the NZFS as a fencing contractor with a couple of other chaps (we got up to the Avoca River in the old 1929 Austin written up in a previous blog). I dropped my pack and wandered over to the hut with my camera. Again a hut with history etched into its walls. Just as I was about to depart I noticed a bright area high on a wall lit by a reflection through what was left of the window. Investigating the spot closer, there was my brother's name along with his fencing mates. I did photograph it but can't access the slides at present (more earthquake shite - not living in my house whilst being repaired). A great find thanks to a shaft of light directing me to it. Warm memories of one of my first tramps - and of some early tramps and climbs in the mountains with my big brother. 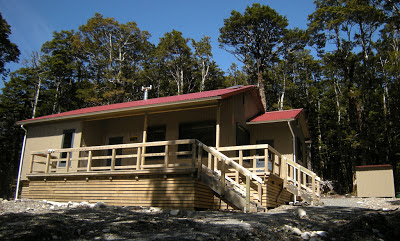 But here is my issue - with myself! The hut above is the new Hawdon hut as it was a few years ago, several months after it was rebuilt by DOC after a fire destroyed the previous hut. We tramped up the the valley in the late afternoon, past the old hut site and on for 20 minutes to a clearing at a turn in the river. I literally stopped in my tracks as I saw this brand new hut - a grand edifice far removed from the style of yesteryear. On entering and looking around before even dropping my pack, I commented to my tramping mate Graeme.
"What do you notice?' I said.
"It still smells new" he replied.
"There is no graffiti at all - yet" I responded.
And there wasn't - nothing at all. Impressive considering the number of people who had already visited in the few months since it had been open, including a number of school groups.
And somehow, graffiti does not seem appropriate in this new hut. I was relieved that the walls were bare, but I can't quite explain why I no longer want to see history continue in new huts as it has for well over a century in high country huts. I'm baffled - with myself.
Maybe I need to go walkabout in the hills again to cogitate this matter!!
But wait, there's more on this graffiti subject - tune in again soon.
Posted by REFOCUSED at 8:50 AM