Graffiti - this post has been in the making for a long time - a very long time - since July 1997 to be exact.
At that time I was up on Melville Island in the high Arctic participating in "In The Footsteps of Parry" expedition. Edward Parry was a British naval explorer sent out by the British Government in 1819-20 to try and find a way across the top of Canada to the Bering Sea - what we now know as The Northwest Passage. Parry with his two ships, got as far as Melville Island before the sea ice prevented any further progress - and soon after retreat. He chose to winter over in a sheltered bay on the south side of Melville Island - aptly named by him Winter Harbour. The story of Parry's expedition is a grand one and was obviously the reason we were there - but that is not why I'm writing this. 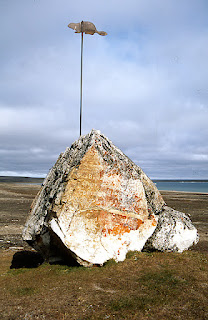 The image above is Parry's Rock - an erratic at the entrance to Winter Harbour. This rock stands ~3 metres high and stands out from the relatively flat terrain from a great distance. Its presence was to become significant in subsequent years. In 1820, whilst Parry's two ships were ice bound in the harbour, Fisher, the expedition surgeon, engraved details of the expedition on the rock. The details are not so easy to read here in the image but they are very clear close up. 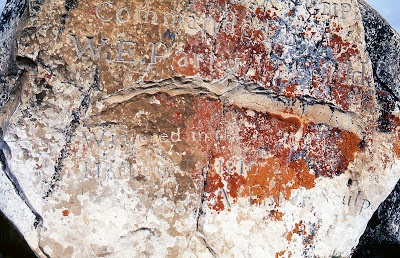 This led me to thinking about graffiti at the time. I'm guessing it is - it is no different from what people do today in huts. Humanity has a thing about leaving their mark. I'm not anti graffiti (read on) - don't get me wrong.
To my mind, there was a very good reason for Fisher to record their presence on the erratic rock in Winter Harbour. They were explorers at the cutting edge and I would roughly equate this with filling out a hut book in the mountains here in NZ - to record your presence and intentions - a means of being found if the proverbial hits the fan!
This proved to be true in the case of Parry's Rock. Subsequent expeditions spotted this rock and used it to record their presence. Explorers such as McClintock, McClure, Kellett, Bernier -a few of these were searching for the ill fated Franklin expedition. 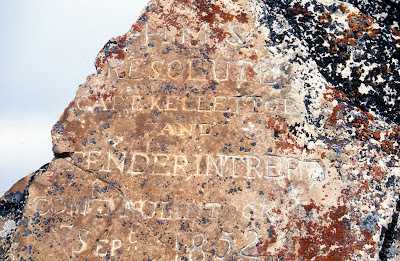 The rock became an 'Arctic Post Office'. Many lives were saved as a result of recordings on this rock. Messages were left in a small metal cylinder at the base of the rock and the cylinder remains there today. 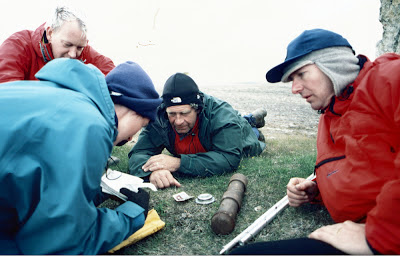 ﻿
In the 1970s the cylinder disappeared - fortunately to the Yellowstone Museum. The original meesages are now carefully cared for there, but copies have been put back into the cylinder and returned to Parry's Rock on Melville Island.
And thus my interest in graffiti was rekindled, and I will continue this subject soon.
If you are keen to learn more about Parry's Rock and the Parry expedition, there is plenty on Google.
Posted by REFOCUSED at 8:34 AM