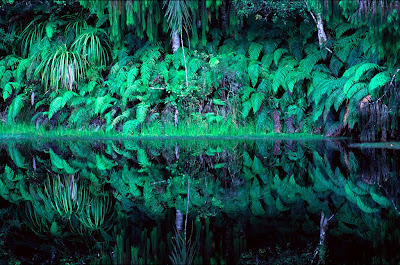 We're still in Ross - that thriving little rural community on the West Coast. Ross started life as a gold town as mentioned in my last post, died a natural death and good folk like my father in law took over as the town's biggest employer for many years.
Now the town is in decline and once again gold is the mainstay. The town used to boast two excellent walkways - one still exists, but the other, which lead up this dam (see image) was destroyed over recent years in the pursuit of that gold, now using modern methods. The old dam was built by the early prospectors and fed the many sluice operations at the time. It is now nigh on impossible to get to this dam - the track is long gone or overgrown, the gorse is thick in the new tailings. The owner of the current mining operation tells us there is still $2,000,000,000 (read two billion) worth of gold under the town!!
Small fry I guess when you think of what it is going to cost to rebuild Christchurch. Or was that the whisky talking??
Posted by REFOCUSED at 5:32 PM No comments:

End of an Era 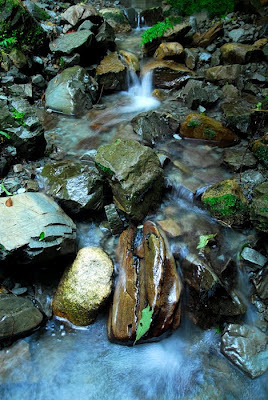 Ross, Westland.
Back in the late 1800s Ross had a population exceeding 30,000 and more pubs than you could complete a pub crawl still standing.
In 1909, "The Honourable Roddy Nugget" was found in Jones Creek (see image), weighing in at 99 ounces. The NZ government bought it and presented it to King George V as a coronation gift. Subsequent enquires in the 1950s as to its whereabouts, discovered that it had been melted down to gild a royal tea service, but that this tea service could not now be located!
In 1947 Peter Gurr drove his Indian motorbike over to Ross to purchase the local garage. He was soon followed by his new wife Eileen. Three daughters followed, the first in 1950 - Chris, my wife.
In 1968, I first darkened the doorway of their relatively new home in Ross and was duly ushered to the divan in the lounge which I learned was to be my 'room', clearly visible and well away from the 'Gurr Girls'. The rest, as the saying goes, is history!
In September 2009 Peter breathed his last, and poor Eileen was brought over to Christchurch, soon to be put into a rest home, and subsequently into a dementia care unit.
The house was empty, the furniture sold or taken, and memories cherished. The house was put on the market to sell.
And so it did - eventually. Jim and I drove over last week to collect the remaining furniture, cleared out the cupboards, gave the place a thoroughly good clean as only two husbands of 'Gurr Girls' could do! The keys were handed over.
But before we left town we darkened the door of another famous Ross establishment, the Empire Hotel (or Top Pub as the locals knew it) - the Roddy Nugget is reputed to have been the door stop there at one point. Ah, if only the walls of that place could talk. We drank deep in honour of Peter and Eileen - icons of the West Coast was how the owner of the local gold mining operation described them at the bar).
Finally, before locking the door of #31 Sale Street, I went and lay down on that same divan 44 years after I first lay my head. There were some great memories, but now the soul had gone. It was just a house. An end of an era. I shed a tear as I drove out of town.
Posted by REFOCUSED at 8:04 AM No comments:

Stop the world, I want to get off! Where does the time go?

For the month of February I co-hosted another exhibition out at the Selwyn Gallery in Darfield. I exhibited with my brother Barry (woodcuts) and his wife, Catherine (paintings) - the theme this time "Poles Apart", depicting both Arctic and Antarctic regions, and celebrating the centenary of Scott and Amundsen reaching the South Pole. In terms of sales, the exhibition was not as successful as the one we had two years ago, but then the viewer would need to have a specific interest in polar regions. All three of sold items so we were not disappointed.

I feel a new camera coming on - I have for quite some time, but have been procrastinating. The temptation to go upmarket with megapixels is not there. The thought of going simple with an advanced compact is there but would frustrate me quickly I think. More a second camera for in the mountains maybe when I finally give up carrying my DSLR and getting a sore neck!!

Have sold many of my older lenses and have started to buy new state of the art lenses - which means I guess I'll have to stay in the Nikon market for the time being. I feel the purchase will be soon - I've (almost) made up my mind.

Now, all I need is time! I'm supposedly retired, so who is to blame then??
Posted by REFOCUSED at 1:12 PM No comments: