What do Urban Jungle, Soles, Icarus, Deow, Telmo and Miel, Seth, etc have in common?
They are all street artists.

Twelve months ago, I blogged several times regarding Spectrum 2015 and the display at the YMCA plus new street art around the city.
Well, it's here again in 2016 - and if I understood correctly, this is going to be an annual event for at least the next five years and the venue at the YMCA is to be set up as a permanent home for street art displays. Great news.
Below are some of the artworks at the YMCA this year.

As well, there are new street arts on various walls in the CBD. I haven't had the chance to bike around and view these yet, but I will - and soon.

As new ones are painted, others will disappear as new buildings are erected in rebuild of the city. Maybe in another 100 years - as happened after the earthquake a couple of years ago - these new buildings will be demolished and future  generations will discover these artworks. I'll post the new ones in due course. 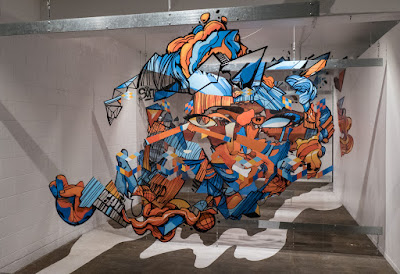 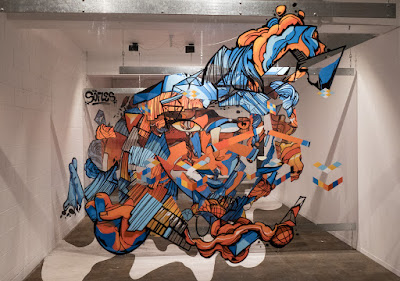 The first artwork you come to is a 3D display on clear perspex - ~4-5 layers of it. You zig zag your way through these layers and come to the front - to the right you see the top image (above), to the left you see the lower image (above).
But...... if you carefully align yourself, you see this (below). Very clever!! 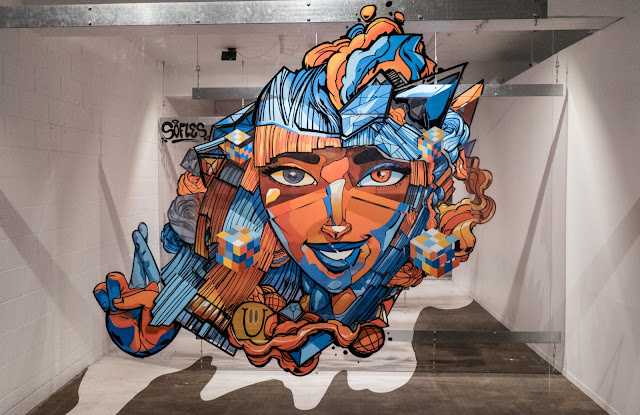 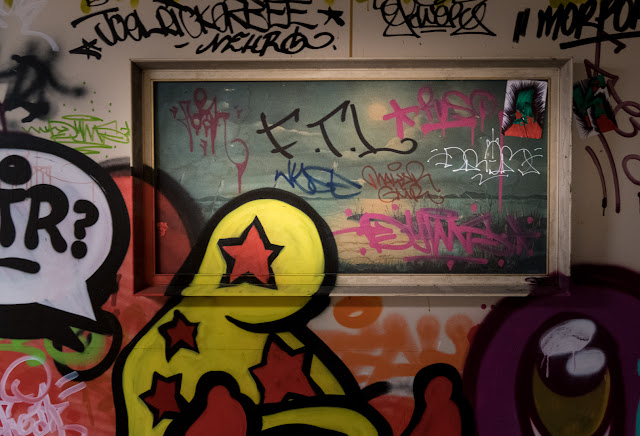 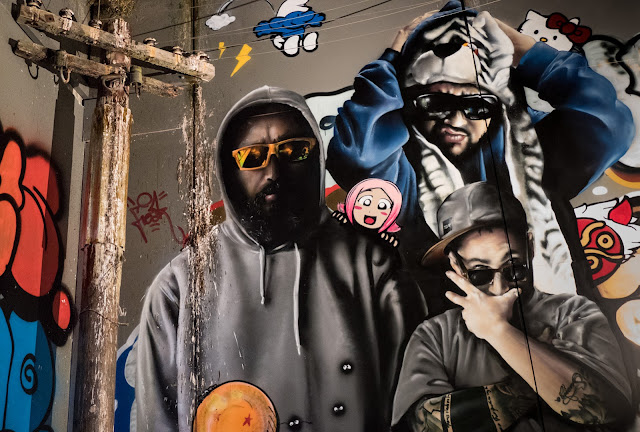 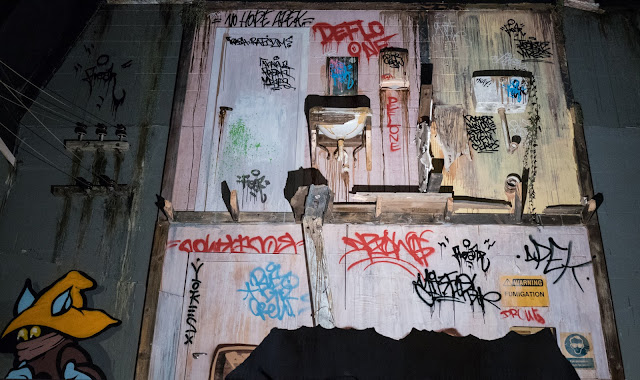 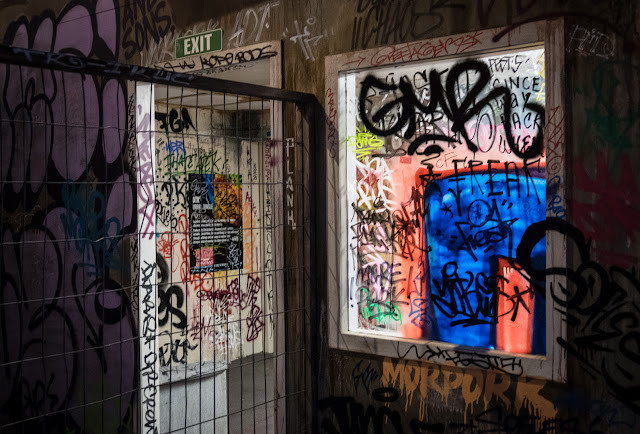 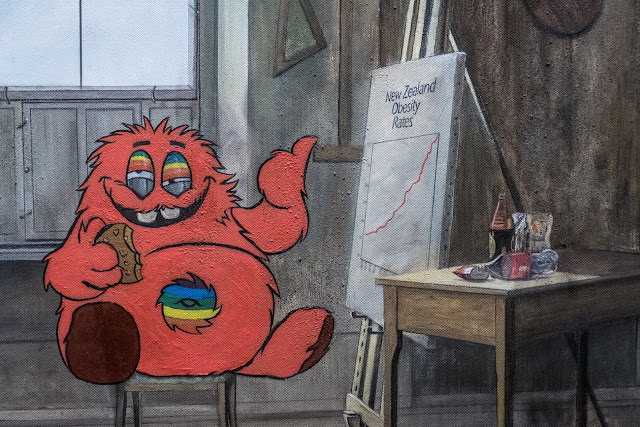 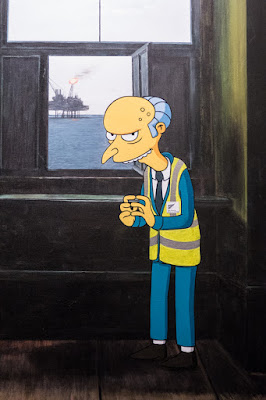 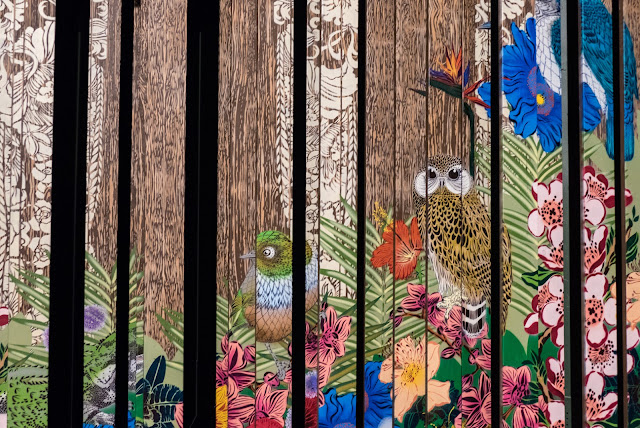 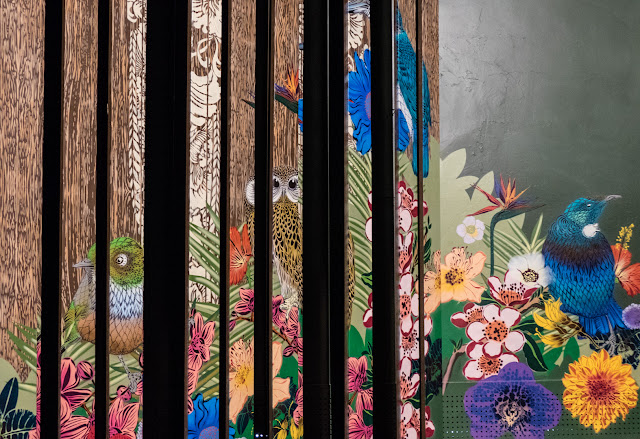 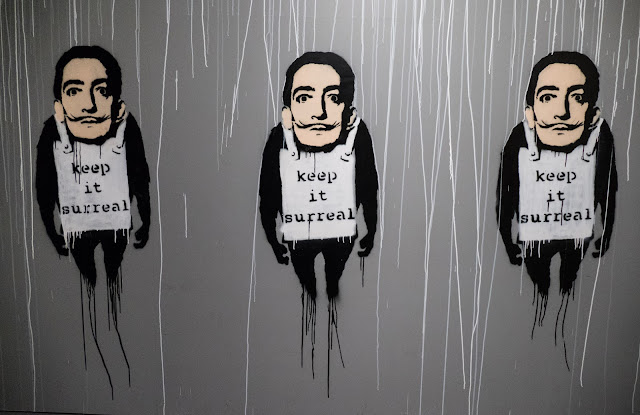 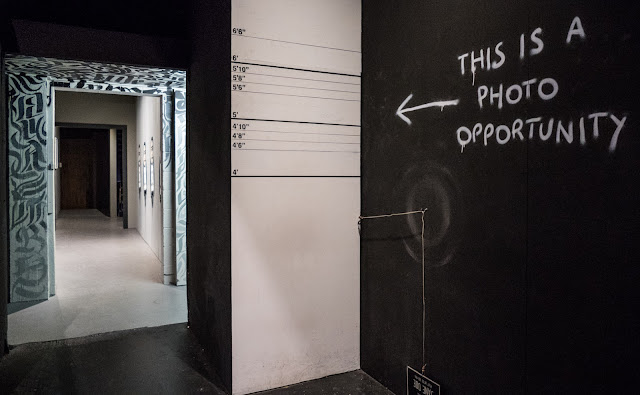 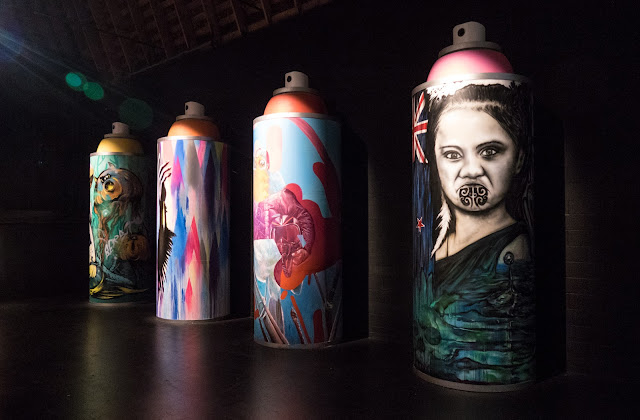 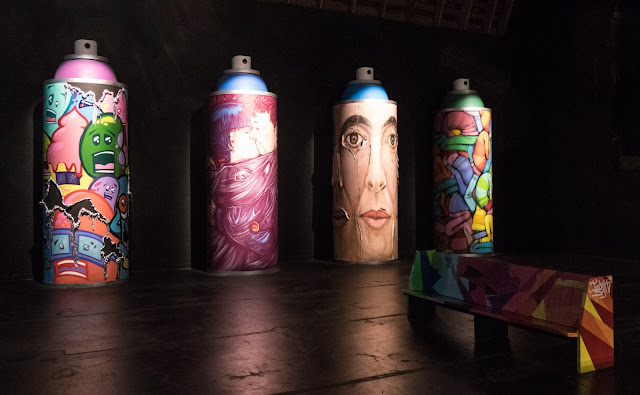 There is one artist (a local - maybe Canterbury) whom I feel is worthy of mentioning. His work is on display year after year. Milton Springsteen - obviously his art name, but the way he takes examples of well known art and reproduces them with a twist is clever. Three examples are scattered in the above group.
Posted by REFOCUSED at 8:59 AM 2 comments:

In the Canterbury region especially, every tramper serves his or her apprenticeship gaining obligatory blisters tramping up the Waimak from Klondyke Corner near Arthur's Pass.
Back in the 1960s I used to tramp up to Carrington - and beyond - every two to three weeks. Easter was a classic time to be in the valley. Back the the CMC used to hold it's annual Easter Camp there. Invariably almost every mountain in the region was summited by at least several pairs of tricounied boots!
I well remember finding myself walking alongside John Pascoe chatting away as we walked up the riverbed in the moonlight to Anti Crow hut. One afternoon I trekked back up to Temple Col to search for the bum strap off my Mountain Mule pack, then returning to the the Pass and walking down the railway line to Klondyke and then up to Anti Crow hut, arriving about 1am - only to return downriver first thing the next morning.
Approximately 1.5 hours up river from Klondyke Corner, two major rivers enters the Waimak directly opposite each other - on the true left is the Crow River and on the true right, the Anti Crow river.
This area was well huttted. The CMC hut at the Anti Crow, CMC's Gizeh Biv in the headwaters of the Anti Crow, the NZAC hut at the head of the Crow - and the six bunk NZFS hut on the Waimak flats 15 minutes downstream of the Anti Crow.

Sometime in the 1970s the CMC relinquished ownership of the Anti Crow hut to the Arthurs Pass National Park. This was to take effect on 1st January. Sadly, on the evening of 31st December, the hut burned down after hot embers fell through a hole in the floor from the open fire. Purely an accident, but most unfortunate timing.

The Crow hut was owned by the New Zealand Alpine Club. It was replaced by a new hut in the 1980s.

Back over to the Anti Crow Valley, Gizeh Bivi at the head of the valley was always a favourite place of mine. On the edge of the bush line, the bivi was nestled into the bush right next to a large tree - a tree which was to be the bivi's demise. In a big storm the tree toppled a fell through the bivi, crushing it totally. Fortunately, no-one was inside at the time. It was never replaced. It was built of old tea cases - pressed tin. There were several of these bivis dotted around the APNP. Sadly none remain now. There were no bunks - just tussock on the floor.

So there you have it. In three blogs I've chatted about all the huts in the Waimakariri Valley, within the bounds of the APNP.

I've always had a love of corrugated iron. I don't recall when it all started, but I suspect it may have had something to do with old musterers huts in the mountains. Whilst modern huts are nice and comfortable, there is nothing to beat arriving at an old musterers hut after of day of slogging through Canterbury tussocks.
On returning from overseas several weeks ago, I quickly learned that there was a Corrugations exhibition on at the museum, closing at the end of Easter. A no-brainer. We had to visit - and we were not disappointed. 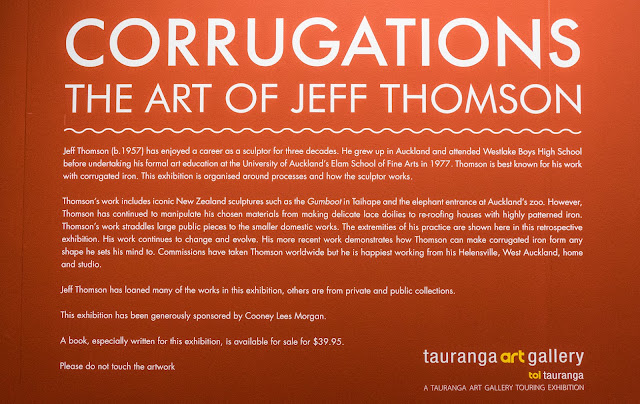 The artist was Jeff Thompson and also his partner, Shona Cameron. The image above explains his background.

The first display on entering the exhibition was a Morris minor car. Now I have owned three of these vehicles and have an ongoing love of them - just like my fondness for corrugated iron. 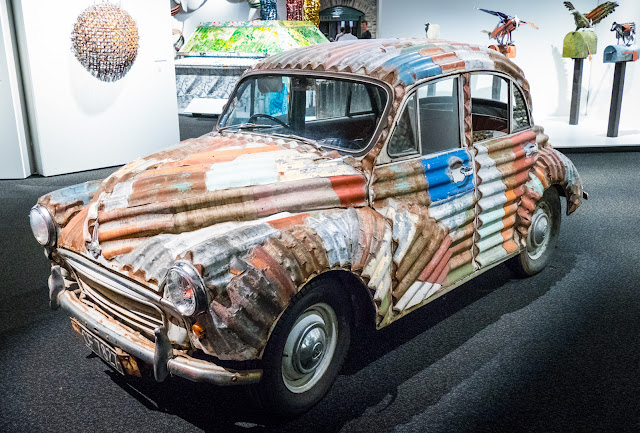 Below are a few more of their artworks on display. There are far too many to show them all. If you get the opportunity, go see the exhibition if it comes to you. Or go see it at the Tauranga Art Gallery when the tour is completed. 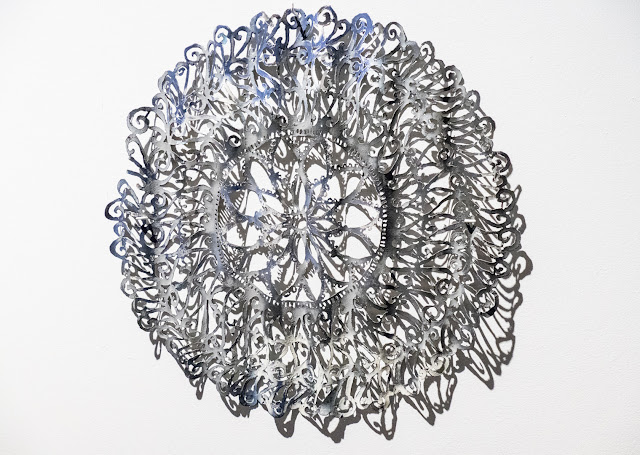 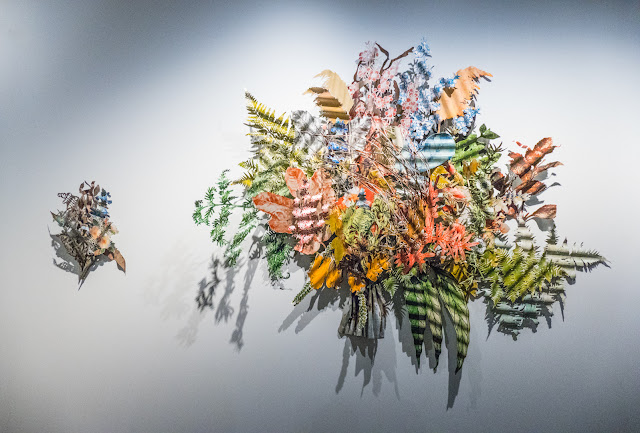 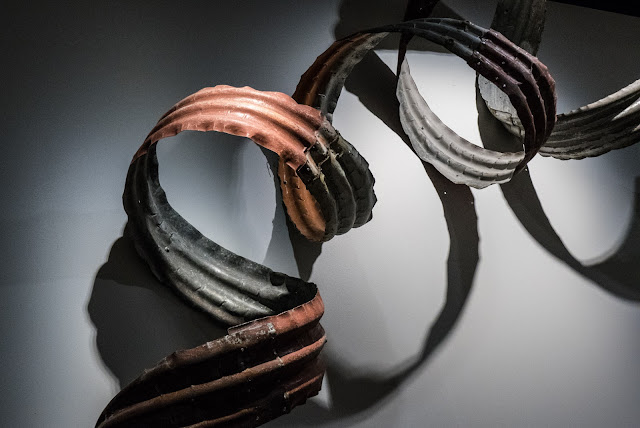 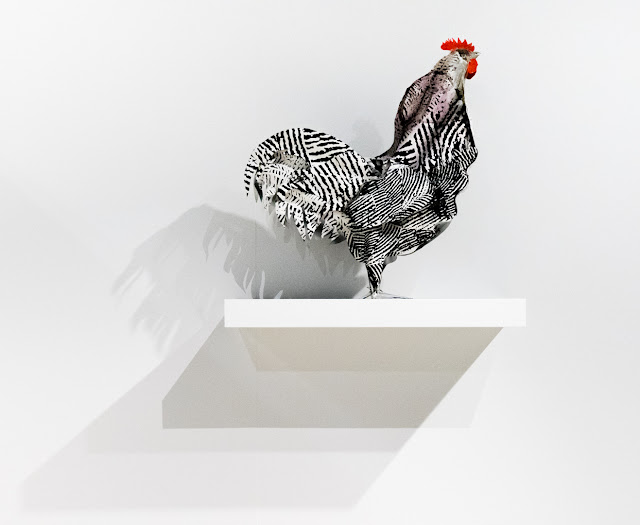 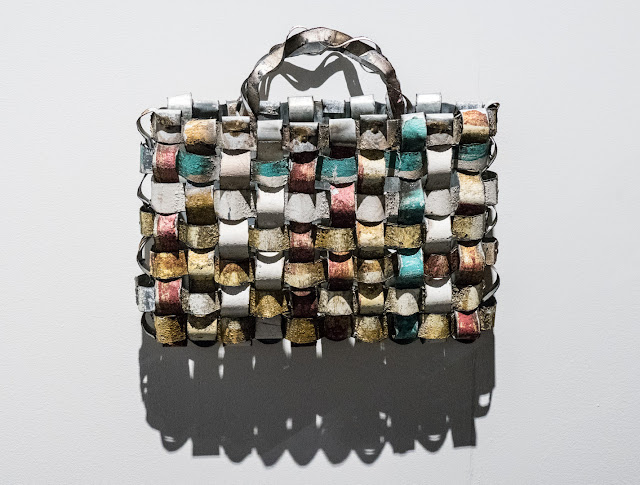 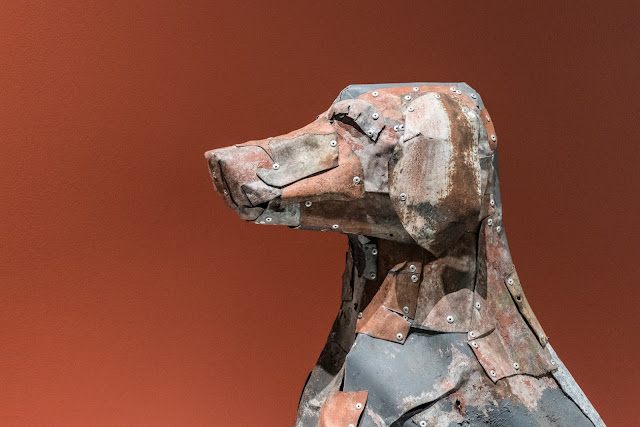 We still dream of building a new home one day. Somewhere and somehow, we'll incorporate some corrugated iron into the design.
Posted by REFOCUSED at 9:39 AM No comments: