Remember my blog from a few months ago re the Majestic Theatre?
Well here I am banging on again - but in a slightly different vein.
On the same day I was there last time watching the old lady being nibbled at with little sensitivity, I noticed two areas - one on the east wall and the other on the north wall - which had appeared. These were revealed, not so much due to the demolition of the Majestic Theatre itself, but due to the surrounding buildings which had previously been demolished.

If you inspect these two images carefully, you will see that the concrete wall of the theatre has been poured directly against the back of these two old walls - one corrugated iron and the other wooden.

At reasonably regular intervals Chris and I like to get away from the shite of this earthquake damaged city for a few days of normality. More often than not, we do this with our good friends Sue and Graeme - and Hemi, their hunter way dog, when he's allowed.
School done for the week for Chris, traditional stop at the Little River Gallery (nothing to do with Ginger Slice and good coffee of course), then off to Takamatua to deliver a couple of my framed photographs to our now retired GP as a thank you for looking after four generations of the family - plus a quick vino - then finally on to Akaroa and our friends. And just in time for happy hour and their meal which they had been slaving over for half the afternoon.
Good weekends with good friends requires much chatting, cups of tea, walks, coffee and eating - and repeats of these five items!! For many trips to Akaroa I have been meaning to capture the sunset from Daley's Wharf, and the late afternoon sky dictated that this Saturday evening might just finally be that time, so with great discipline before happy hour, I slipped away for half an hour.

As always a great weekend away. Next 'get - away' weekend mid September.
Posted by REFOCUSED at 4:02 PM No comments:

If you read my last blog, you will have seen we spent a weekend in Akaroa a few weekends ago with good friends. Whilst there, we invariably walk along the waterfront - and this includes a wander out on the wharf to see what's wagging and a cafe visit.
But I always go and say hello to Frank - Frank Worsley. He was the captain of 'Endurance', Ernest Shackleton's ship of Antarctic fame just over one hundred years ago. In particular, he skippered and navigated the 'James Caird', the Endurance lifeboat, from Elephant Island to South Georgia - to this day, one of the most amazing feats of survival on this planet. I urge you to read 'Endurance', Shackleton's book on the entire expedition - the only book I have ever read from cover to cover without stopping.

Frank Worsley was an unsung hero.

1. The first is about Frank Wild, who was Shackleton's deputy on the famous expedition. Frank Wild has been awarded FOUR polar medals - to my knowledge the only person ever to receive this number - five expeditions in total to the Antarctic. Three with Shackleton, one with Scott and one with Mawson. Wild was left in charge of the shore team on Elephant Island whilst Worsley and Shackleton sailed off for help.
Frank Wild led a reclusive life after the expeditions - first in UK and then South Africa. He died of pneumonia in 1939 and his ashes were lost for decades. They were only recently found, and his ashes were taken to South Georgia and buried beside his close friend, 'the Boss',  Ernest Shackleton's grave on the island.

2. The second is about George Lowe, a kiwi mountaineer and close friend of Ed Hillary. George Lowe was a member of the successful 1953 British Himalayan expedition to Mt Everest. George worked tirelessly in the Khumbu Icefall, and masterminded the route up the Lhotse face and on to South Col, knowing all along that he personally would not be in the summit attempt teams. After Hillary and Tenzing's success, it was to George Lowe that Hillary pronounced (way above South Col when George climber up solo with thermoses for them) - "Well George, we knocked the bastard off!"
The next year, George Lowe was Best Man at Ed Hillary's wedding.

Both Frank Wild and George Lowe are unsung heroes too.

No doubt there are many more. Let me know who you think of - please.

New Brighton pier - yet again!!
It is like a magnet - I keep being drawn back to it. It presents so many moods.
Twice a year the sun rises directly off the end of the pier - approximately 26 April and again 17 August, as the sun moves south in the spring and north in the autumn.
I may have alluded to this in previous blogs several years ago.
The TPE (The Photographer's Ephemeris) software is a very useful tool (a free download and easy to use).

This year my lovely granddaughter, Arna - now the proud owner of a DSLR and keen to learn, was with me on the 26 April to capture the moment. No problems getting this young teenager out of bed way before dawn and down to the pier, not too far from her home.
I have set up my Manfrotto tripod so it will fit on the top of my 2 metre high aluminium stepladder. So on to the pier we hike - with tripod, stepladder, camera gear - and wet weather gear.
The weather gods were not being kind this morning - full cloud cover and threatening to rain - not what the forecast said!
Arna was beginning to think that the morning shoot was a non starter, and she was almost right. We chose to go ahead and use the time as a practice session, so set up her DSLR on my tripod and I sent her up the ladder to start composing her image. This very moment heralded a sudden onset of very heavy rain. Her bottom lip was out now, no doubt fearing for her camera - and rightly so.
"Don't abandon the moment Arna. Quickly compose your shot and grab a few shots". This she did, before grabbing the camera and racing back down the ladder. The rain had set in and further photography was out of the question for now.
Back in the vehicle to dry out - especially her camera, we headed back to my home and breakfast with Grandma.
The camera went in to the airing cupboard and the few images she captured didn't look too flash when downloaded onto my iMac. The bottom lip was out again.
And so began lesson #2 in the comfort of my study, whilst the rain bucketed down outside.........
A combination of Lightroom, Photoshop, and Nik software were played with - Arna at the helm with me tutoring at her level.
The result was this..................

Not a bad effort considering the situation. If it wasn't for the rain, she would not have got the lovely reflections on the pier. And her conversion to monochrome strengthens the mood of the moment.

The bottom lip was no longer out and she was happy again.

She now has this matted and framed (all done by herself) and up on the wall at home.
Even better, she has also sold a copy of this image which is now also framed and on display at a gallery in north Christchurch.

Well done Arna. Some valuable lessons learned on this shoot.
Posted by REFOCUSED at 12:31 PM 2 comments:

How Much is that Pussy in the Window?

Remember the song 'How Much is that Doggie in the Window'?
I'm showing my age! Patti Page first sang it in December 1952 - only 62 years ago. I hasten to add I was only a wee lad in shorts then.
These current school holidays we were supposed to head away to the West Coast to visit friends and do some photography. Sadly, we had to cancel, literally at the last minute, due to Chris's Mum breaking her hip, having surgery, and then getting pneumonia. Then having to find her a new home and transfer all her belongings. Not a good time to be away.
So to Plan B........a few day trips in between family commitments. The weather decided to have its say and virtually all plans were likewise cancelled - except for one.
I'd promised Chris lunch over at Lyttelton, one of our favourite places. Yes, it rained yet again but that wasn't an issue today.
The lunch was good - a cafe only opened three weeks ago. The town is slowly but surely coming alive again - and if ideas come to fruition, has a wonderful future. The place to be!!
Following lunch, between a lull in the rain showers, we wandered the streets - and almost immediately came across this cat. Ah, if only I had my big camera instead of the phone camera. The image ~1 second before this one was captured was priceless.


Afternoon tea at 'She Chocolate' in Governor's Bay was pretty good too.

At least we salvaged a little something from the holidays.
Posted by REFOCUSED at 10:06 PM No comments:

You're never too old to learn!!

"Let's take a selfie Grandpa" said Arna during our tramp last week (see previous blog).
I'd heard about these things but never felt inclined to participate. Besides, who on earth wants to look at my ageing dial, complete with its 'Burt Jowls'.
But when a young teenager and modern technology collide what choice does one have? Go with the flow Johnnyboy.

"Grandpa, I want to cross a swing bridge. I've just seen a poster at Macpac. Will you please take me tramping?" said my granddaughter, Arna, a few weeks ago.
Grandpa thinks to himself - blimey, it's mid winter, go easy on an old man!
New Zealand, and in particular the South Island, has many swing bridges in remote back country places. They certainly have their place - on the mainstream 'popular' tracks they enhance safety and guarantee completion of iconic routes, irrespective of weather conditions - even dry feet sometimes! In other more remote situations, progress would cease if the bridges did not exist - such is the ruggedness of the terrain and the flow of the river below. You have to admire the DOC staff who install them.
So where do you take your 14 year old granddaughter for a good experience and getting the balance right - not too boring and not so terrifying as to put her off for life!!
We settled on part of the St James Walkway in the Lewis Pass area, a two and a half hour drive from Christchurch.
"How many swing bridges are there Grandpa?" asked Arna.
"Three" I replied.
"Is it a round trip?" she responded.
"No, in and out"
"Then how come there are three bridges? Are we going to cross a river?"
"Might be," I grinned. "We'll come back down the valley a slightly different route."


A perfect tramp - the weather gods were kind, we had the hut to ourselves, the firewood was dry, the meal was great, the morning frost was big (-10C). And the company was awesome.
Posted by REFOCUSED at 5:37 PM No comments:

I enjoy a wee dram every now and again.
Nothing beats a good single malt - and there are a number of them.
Some close friends share my liking for the Scottish nectar too.
The annual tramp with the lads - now going 34 years, is a grand occasion and the rules now dictate that single malts are required with blended scotch unacceptable. The preference is for each person to bring a different single malt - thus requiring a tad of organisation!!
This year was no exception and the annual event was on Richard's yacht (see previous blog). Imagine my surprise when in a reflective moment sitting around the saloon table, I read the back of the bottle of the current tipple................ 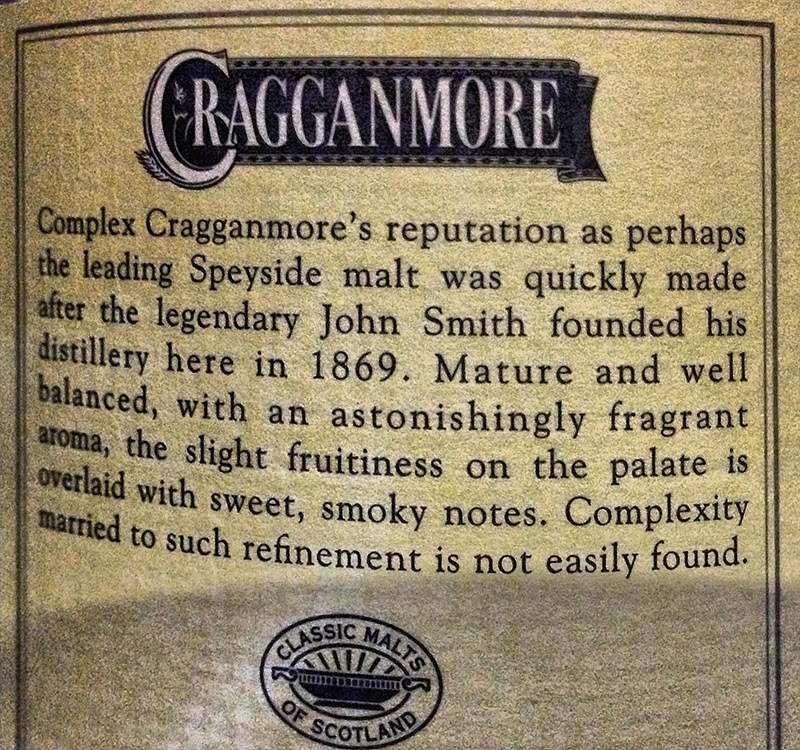 He gets around this John Smith!!
A lovely drop too.

Posted by REFOCUSED at 5:25 PM No comments: