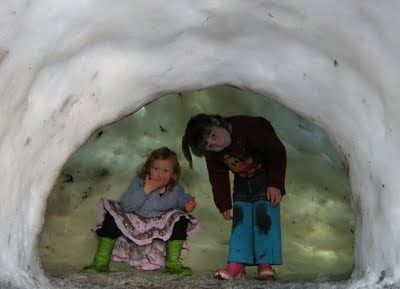 Why does life flash by so fast I ask? Why, it was only a few moments ago I was at the pier I say. The calendar tells me otherwise - that was two weeks ago!! Since that night I have captured ~500 images and what do I have to show for it? Nothing!!
- Old trucks (yet another passion) at Leeston
- Little River (ginger crunch and coffee)
- LTWS at Hokitika (exceeded my expectations)
- Lyttelton (Cofishot girls today).
Images galore but none attended to. Oh the joys of the digital age!!

So where do I start??
Family of course. The rest will come later - inshallah.
Big brother Barry banged on the door yesterday and presented me with his autobiography "One Foot After Another - a memoir of an active life". Catherine, his long suffering wife, and two grandchildren appeared too. A great catch up -wish they lived here in ChCh with us - fat chance of that after all the shite this city has been exposed to of late!!
Snow!! Heaps of it - for this fair city anyway. We arrived home from the West coast on Monday - 1.9 degrees the max!! Just managed to negotiate the campervan into its park. An igloo had been built in the reserve earlier in the day - who knows who built it - but they did a superb job. A 'must see' for my great nieces (think I've got that right), so here they are in their element, exploring the unknown - just like their Grandad in his autobiography.
Hope I don't come out too badly in the book. I did break his birds eggs and pee down his back once. But he is a loveable rogue!!
Posted by REFOCUSED at 8:05 PM No comments: 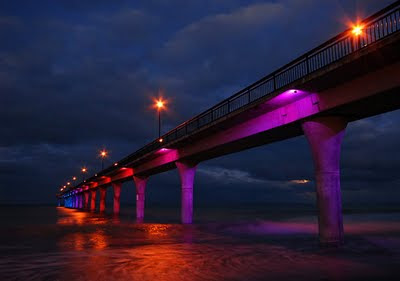 Last Friday evening was full moon. The TPE website (The Photographer's Ephemeris - look it up - it's brilliant) told me the moon was to rise at 1713 approximately 30 degrees to the right of the New Brighton Pier. The weather had been pretty good all day so of course it should have been a great night for full moon photography as it rose out of the sea with the pier as a foreground. Yeah right!! As so often happens, as I drove towards the beach, the clouds scudded over - more and more. What moon??
I texted daughter Rachael and granddaughter Arna who live at South Brighton and told them where I was. Within minutes I had company - but still no moon. We experimented and before long the pier lights came on. Now I have to say at this point that the favourite colour for both Rachael and Arna is purple, so we played more with colours. Now when you are doing long exposures and the pier colours are changing constantly, it is not easy to get the colours you want. Persistence paid off and we did manage a few reasonable images.
But I'm not totally happy and will go back and try harder - and also ensure all the settings on my camera are as they should be - and I'll remember to bring my headlamp!
The moon appeared as I getting into the vehicle to go home!
Thanks for the company guys. A great, if not cold, start to Arna's school holidays. 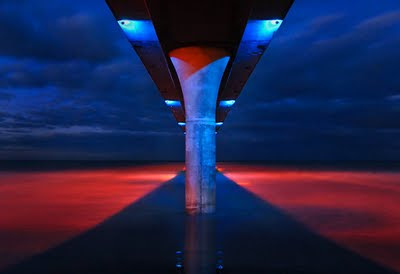 Posted by REFOCUSED at 4:50 PM No comments:

My granddaughter, Arna, is staying with us during the holidays. I set her the task of choosing three of her favourite images, taken on her new wee Samsung camera which she got for Christmas. From the three, she chose this one - sunrise at Bagara near Bundaberg, Queensland. She took this during her holiday there last April. She is an enthusiastic photographer with good potential and keen to learn more. Maybe we will see more of her images here in the future - if she doesn't set up her own blog in the meantime!!
Posted by REFOCUSED at 1:32 PM No comments: 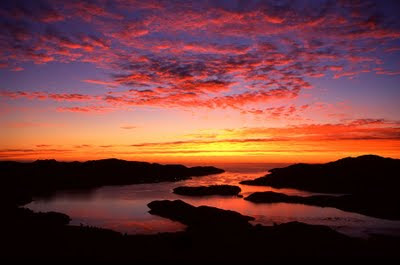 I love heralding the new day and savouring the last of each day. Capturing these glorious moments is not quite so easy. Is there such a thing as a perfect sunrise/sunset image? Somehow I doubt it, but I continue in the forlorn hope that it might be me who finally does capture that elusive image - and in the meantime I will continue to enjoy each day's beginning and end.
In my stock of 60,000+ images I have hundreds of sunrises and sunsets but they all fall far short of perfection - whatever that is! No photographic judge/commentator is going to determine the answer to that question, no matter how good they are - or think they are! 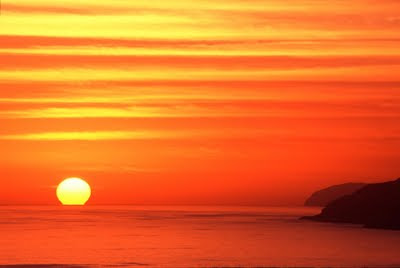 My friend Mark from Oman, sent me a link to a British photographer a few days ago. His website made reference to a quote by Galen Rowell, an American photographer and mountaineer whom I'd looked up to for years - my long distance 'mentor'. I'd read all his books - own many of them - and followed his many expeditions with huge interest. Chris and I made plans to make the pilgrimage to his gallery in Bishop, California after my return from the Arctic in 2002. To our horror, 6 days before, Galen and his wife Barbara were killed in an aeroplane crash as they landed at Bishop after a successful photographic expedition in Alaska. We continued on our pilgrimage and I would highly recommend his gallery 'Mountain Light' in bishop.

Galen's quote is .............
"You only get one sunrise and one sunset a day, and you only get so many days on this planet. A good photographer does the math and doesn't waste either."
Posted by REFOCUSED at 8:40 PM No comments:

Of Movement and Movement! 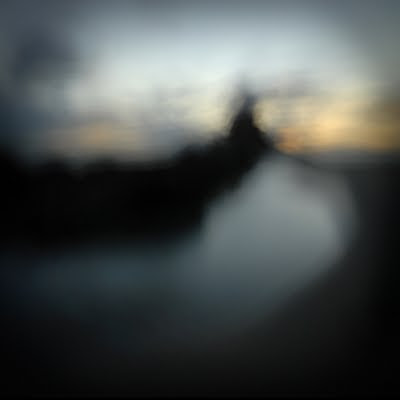 Just over a week ago I mentioned I was playing with movement again on a local subject.
Well that subject was Rapaura - Shag Rock, out at Redcliffs. Shag Rock, an important landmark to local Maori, is now unfortunately a shadow of its former self. The rock stood at the mouth of the Avon/Heathcote estuary (see blog 12 May 2011) and was an icon to Christchurch residents since the inception of the city ~1850.
On 4 September 2010 in the first earthquake it was given a severe shaking with many rocks falling off it. On 22 February 2011 the major quake completely demolished it and it now looks like a broken tooth. A sad end to a grand landmark. I drove out there before dawn ~10 days ago to endeavour to replicate the image shown in the 12 May blog - more on that later as time allows. In the meantime I was keen to play with my newly acquired x10 ND filter. Here is the result - my attempt to mimic the moment at 1251 on 22 February 2011 when the earth shook violently.
Posted by REFOCUSED at 7:49 AM No comments: 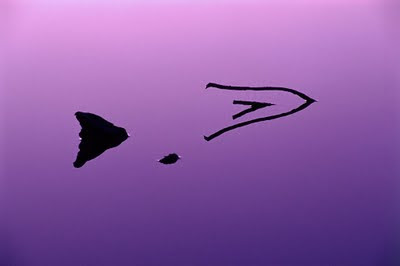 Yesterday I spoke of reflections and reflecting.
I continued to reflect as I beavered away in the workshop, wishing I was out there, camera in hand, capturing a few good images. I really do need to re-prioritise and make the effort to get out and about. I have made some diary notes (for those who know my love affair with my diary, don't laugh!) for future dates in the not too distant future. Watch this space!
In the meantime and reflecting on, I recalled the moment this image was captured. Alone on the remote Kakapotahi beach on the West Coast of the South Island, I had packed up my camera bag and tripod after a beautiful sunset sequence, and was walking back to my 4WD in the remains of dusk, tripod over shoulder without a care in the world, when out the corner of my eye I spotted this scene in a puddle on the track. What is it I hear you cry? Maybe it is just a heap of untidy driftwood in a muddy pool. In fact that is all it is. But what I saw was a fish and the colour was the sky reflected in the muddy pool, the driftwood - all four pieces of it - also being reflected. Hence the title "Evening Catch". Study it closely. The exposure was ~25 seconds.
And still I continue to reflect.................
Posted by REFOCUSED at 7:57 PM No comments: 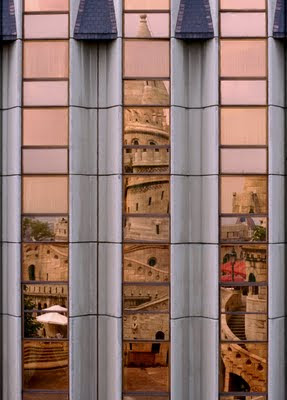 "Tis a time for reflecting!
I've set the 'Coffeeshots' group the subject "Reflections". Why this subject right now? I love photographing reflections of all kinds. Unfortunately I haven't had the time over the past week or so to get out there and capture a few reflections. The framing business has been keeping me out of mischief too much!
The recent earthquakes and aftershocks have resulted in several cancelled adventures, but has not stopped me reflecting on past adventures - expeditions, travels, great memories, etc.
So I've selected these two images, both of which bring back great memories.
The building is the Halaszbastya (The Fisherman's Bastion) in Budapest, Hungary, reflected in the windows of the modern Hilton Hotel in Buda. It was a chance observation as Chris and I were playing tourists during a 6 week Eastern Europe adventure some years ago.
A few seconds after this image was taken, poor Chris was almost knocked out by me when I thought I was 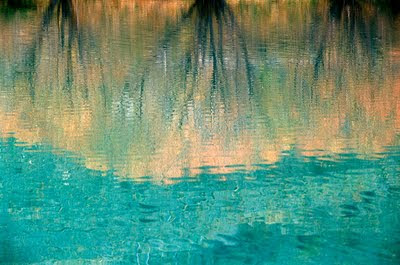 being robbed. It turned it was only Chris being friendly and putting her hand around me as we waited at a pedestrian crossing!!
This second image is at the West Arm of Lake Benmore. It doesn't require any detailed explanation. It constantly reminds me of the lovely country we live in here in NZ. The wide open spaces and the beautiful silence you hear in remote areas of this beautiful country.
I shall continue to reflect - frequently!!
Posted by REFOCUSED at 9:18 AM No comments: 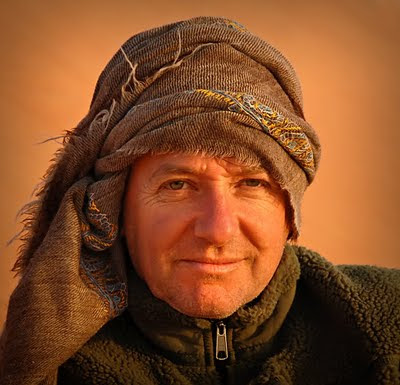 Mark has been the leader on all the expeditions I've done both in the Arctic and in The Middle East in the past 15 years or so. I met him in Saudi Arabia in the mid 1990s. He has done an enormous amount of hard work for humanity, especially youth.
Mark was the founder of Connecting Cultures - www.connectingcultures.co.uk
He also established Outward Bound Oman www.outwardboundoman.com in 2009 and is now the Director of that.
Mark and his wife, Madeleine, live in Muscat, Oman.
On 28 June 2011, Mark was invested with his MBE by the Queen at Buckingham Palace.
Well done Mark - congratulations. You deserve it for all your hard grafting.
I was planning to darken the door of his favourite pub just around the corner from the Royal Geographic Society in London and surprise him with a pint to celebrate the occasion. Alas other events took over.
Mark is a great friend and expedition companion.
Posted by REFOCUSED at 4:31 PM No comments:

It's All About Movement 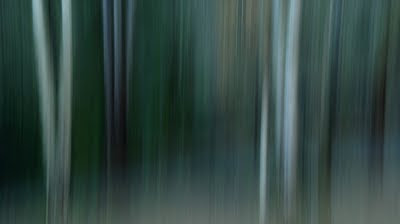 It's all about movement.
That's about all we live and breathe in Canterbury of late - there is always something moving! The earth (will it ever stop?), the trucks, our belongings, ourselves........ the adrenaline gives it's multi-daily bursts and affects some of us more than others.
But life goes on.
I was up at Photo and Video in Merivale Mall a few days ago to collect an image enlargement. 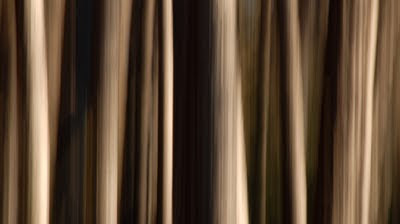 Who should be there but Tony Bridge and his wife, down from Hanmer. No doubt in between his many winter workshops. I am looking forward to hearing his pearls of wisdom at Winter School in Hokitika in three weeks time.
Meeting up with tony reminded me that it was exactly 12 months ago that Chris and I were last up at Hanmer in the campervan and with our mountain bikes - awesome winter weather but frosts like the Arctic! On one of the many bikerides around the Hanmer forests I experimented with movement. I'd never got around to checking the images until now. Some interesting results. I tried again yesterday with a local subject (or rather what's left of it), but that's a story for another day.
Posted by REFOCUSED at 8:05 AM No comments: