So today is 20th May 2016. What's so special about this date I hear you ask? Be patient and I will tell you - but first a story.

When I was a teenager I came across an adventure book called 'South' by Ernest Shackleton. It looked a good read, so went to bed early at 353 (no TV there to distract me then) and buried myself in the book. At 5am I finished it - totally mesmerised and spellbound by this amazing story of survival. To this day it remains the only book I have read from cover to cover without putting it down.

I speak of the Antarctic expedition lead by Ernest Shackleton and his ship Endurance, captained by Frank Worsley, a Kiwi from Akaroa, not far from home. The ship was crushed by pack ice in the Weddell Sea in the Antarctica. I'll leave you to read the story - it is well worth the effort, but in short they man-hauled several lifeboats for hundreds of miles to Elephant Island on the Antarctic Peninsula. They were on terra firma but no-one knew where they were or what had become of them - and no ships were likely to come their way.


Shackleton was determined to rescue his men. One of his lifeboats was called 'The James Caird' - with the help of his carpenter this boat was modified and a mast and sails prepared. Six men, including Shackleton and Worsley, launched the boat and set sail for South Georgia, 800 miles distant, leaving the rest of the expedition members on Elephant Island, hopefully to be rescued later.


On the 18th May 1916, thanks to superb navigation skills by Worsley in terrible conditions, they arrived on the southern side of South Georgia at King Haakon Bay. At 3am on the 19th three of them - Shackleton, Worsley and Crean - started the daunting trek across the island to the nearest whaling station. At 3pm on the 20th they walked into the whaling station at Husvik near Stromness.


The crossing had taken 36 hours - an adventure worth reading in itself. Not without its moments!
In modern times a number of climbing parties have tried to replicate the crossing - it has been done, but no-one has ever got close to the 36 hours.

The next day they returned by local boat to rescue the three members back at King Haakon Bay on the south side. Later, after several attempts to get to Elephant Island were thwarted by ice, the remainder of the expedition was rescued.

I have left huge gaps in the story, so you will have to read 'South' to complete the epic.

And so, about this date - the 20th May 2016. It is 100 years to the day since Shackleton, Worsley and Crean arrived to announce their survival to the world and commence the rescue.

How do I know this? Well by sheer coincidence, I happen to be reading 'Frank Worsley - Shackleton's Fearless Captain' by John Thomson, and I just happen to be at the arrival at Stromness. Quite the shock! 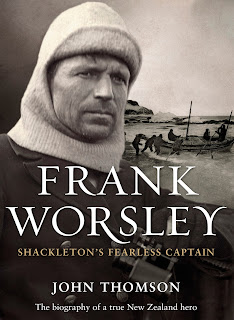 Not bad for an Akaroa boy!! 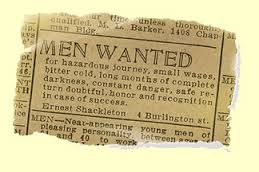 OMG!!
Maybe the Alzheimers really is setting in.
My big brother Barry (I think the only person who reads these blogs) has recently reminded me that I have forgotten one hut in the Waimakariri Valley within the APNP - Greenlaw hut. And following the shock of that, I also remembered that I had also forgotten Bealey Spur hut. Now believe it or not, but both these huts were amongst my favourites. How could I forget them!!

Greenlaw Hut
Greenlaw hut was situated about 50 minutes walk downstream from Carrington hut a few hundred metres up Greenlaw Creek. This hut was invariably by-passed by trampers, preferring to get to either Carrington or Anti-Crow huts - or even out to Klondyke Corner.
However I loved it - it was quiet, well appointed, light and in pretty good condition. The last time I stayed there was with Doug Rankin when we did the Three Pass trip from west to east in 1986. Sadly, not long after that the APNP saw fit to remove it as it was under-utilised.
One challenge when walking down the Waimak riverbed from Carrington to Greenlaw was to search for the old car which was driven up the Waimak from the old Bealey pub way back in the 1920s. Sadly it never quite made it to Carrington - although it did get very close - only a few kilometres short. I saw it a few  times on the true right side of the riverbed in the 1960s but never did get a photograph of it. I suspect it has gone forever now....... but you never know!

Bealey Spur Hut
This hut was an old musterer's hut - the oldest hut in the area built in 1925. A gentle uphill two hours from the Bealey Village at the foot of Bealey Spur will bring you to the hut door in a clearing. It has recently been renovated - now with foam mattresses rather than the old sacking bunks - but still retain the old beech supports internally. The views looking out across the Waimak are outstanding on the trek in, and at Happy Hour as short walk for two minutes with supplies will bring one to open tussocks overlooking Klondyke Corner and looking directly up the Mingha River to Mt Oates.
Beyond the hut and maybe a 40 minute gentle climb - now in open country will bring you to the top of the ridge towards Jordan Saddle. The views from here both up and down the Waimakariri River are to die for! This would have to be one of my favourite places in the mountains. I've taken my wife, my granddaughter, overseas friends, etc up here on numerous occasions. It is a great place for a day trip, an overnight trip, or a launching spot for ventures beyond - Jordan Saddle and the Avoca, Lagoon Saddle to name two.
And to think I forgot it!!

I cannot talk of the reopening of the Art Gallery (previous post a few minutes ago) without mentioning Rita Angus (Rita cook as she was in the 1930s).
As a Canterbury artist she was outstanding. They must have been very heady times back in the 1930s with all the known artists either living together - or coming together on a regular basis to discuss, paint, debate, etc.

Rita Angus did a number of paintings in the Cass area at Craigeburn. This is her most famous painting. The gallery reframed it not long before the earthquake - a big improvement I felt. 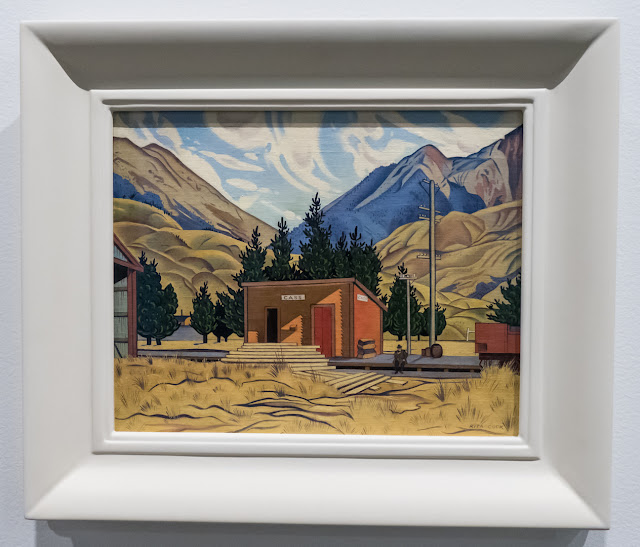 However she also painted this one (below) which I personally prefer - and have a print of in our guest bedroom here at home. 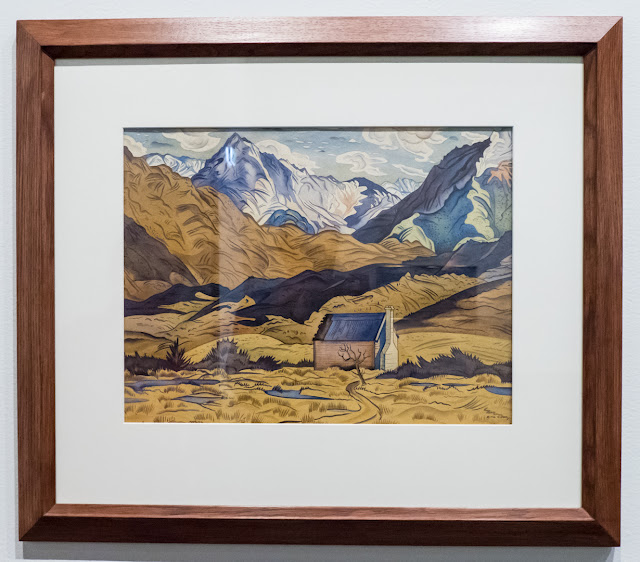 Chris and I have promised each other we will take time out from our busy lives and do something together each weekend. Hopefully this promise will last - and so far it has. 'Tis good for the soul.

Our Christchurch Art Gallery reopened just before Christmas, after all the repairs following the February 2011 earthquake were finally completed. Sadly I was away overseas at the time. Chris was here and was the first through the door on opening day. She was keen to escort me through the new exhibitions, most of which were based around local art and artists - and appropriately so. I have to admit it was quite an emotional moment walking back through those doors after over 5 years. 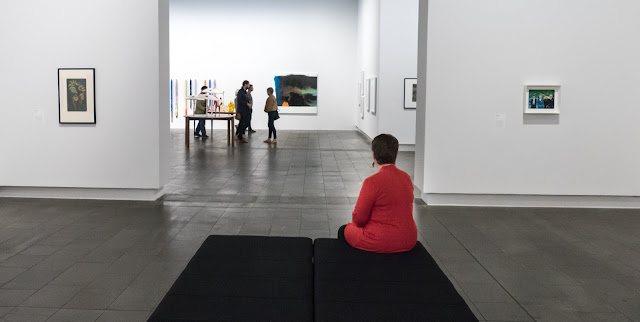 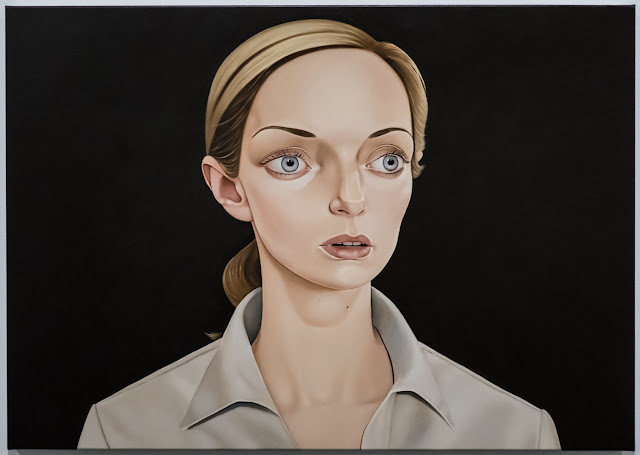 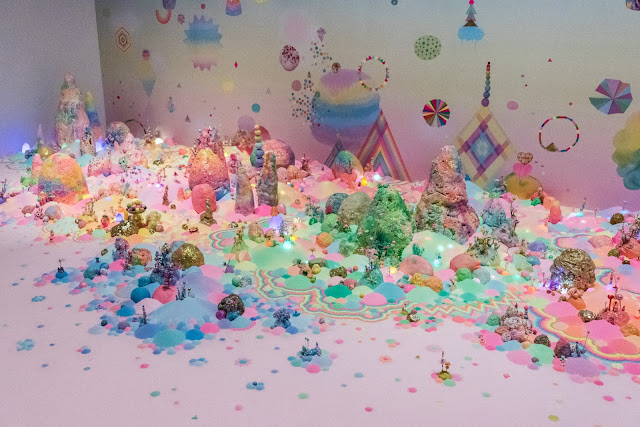 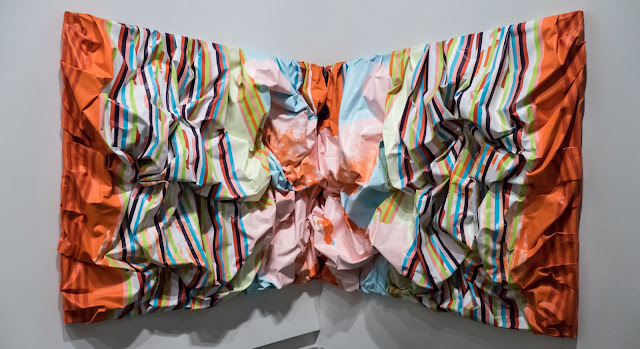 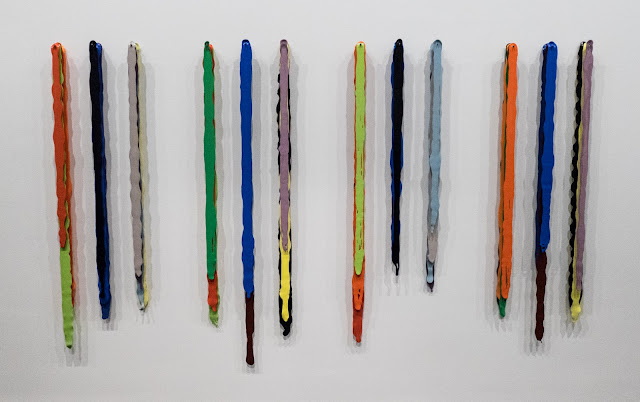 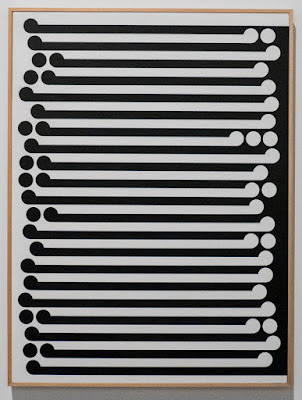 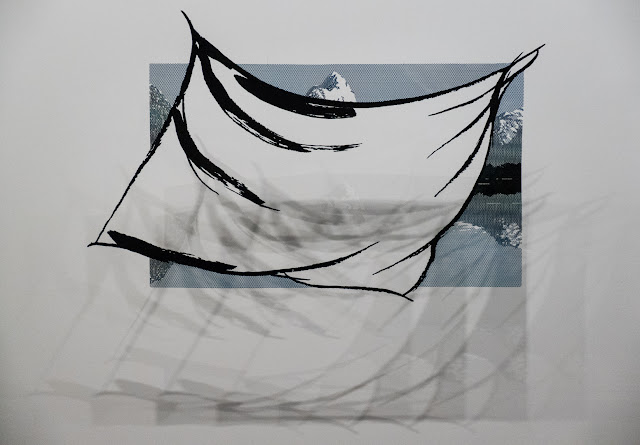 One of my favourite Canterbury paintings is this one below "Camp in the Kowai' by Austen Deans from Peel Forest. 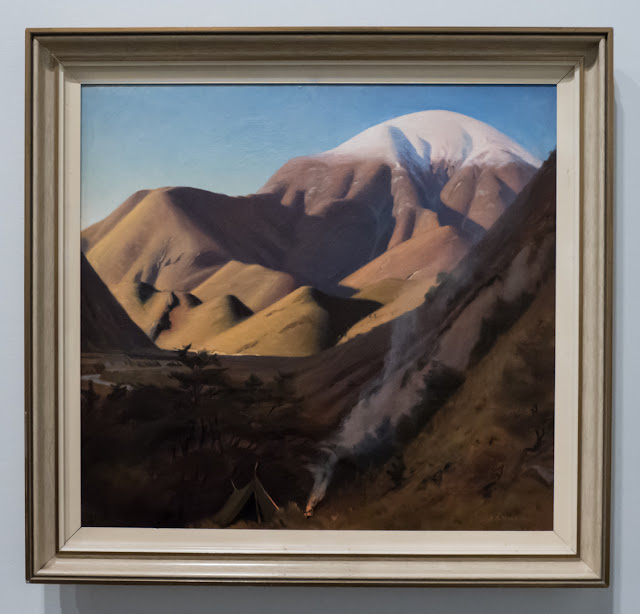 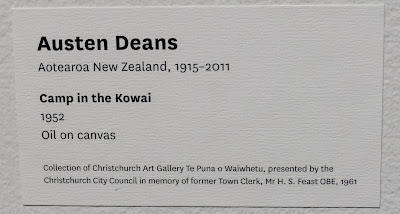 It is an annual event for us to get up early on Anzac Day to attend the dawn service. This year was no exception. In recent years our granddaughter, Arna, being an air cadet, has marched in the parade. Sadly this year she was absent as she was away on a senior cadet course at Burnham military camp but she attended parade there.

The oldest veteran this was 103 years old - very spritely for his age -and long may he continue this way. He led the parade, driven in a WW2 Willys jeep.

In so much as I am against war, I am so grateful for what our forebears did to enable us to have the the freedom we experience today. Sadly though, the world does not learn. Memories are short!


Posted by REFOCUSED at 6:54 AM No comments:

Laurence Aberhart, a well known New Zealand photographer, has a distinctive style. He works mainly in black and white - and captures buildings, maori carvings, museum work, war memorials, plus some landscape. He is gathering together a contemporary history of New Zealand and overseas.
His work is exhibited internationally and examples of his style can be found in many galleries.

The Christchurch museum recently exhibited his war memorial series (both New Zealand and Australia) prior to this year's 100th anniversary of Anzac remembrance parades. 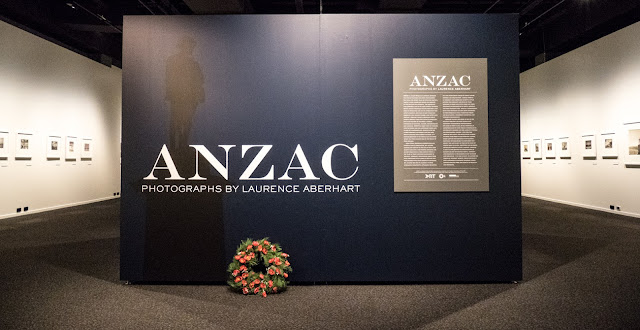 Posted by REFOCUSED at 6:38 AM No comments:

It all started in 1981with four of us, all keen trampers and mountaineers, deciding to come together for an annual event - and here we are in 2016 and just completed the 36th annual jaunt into the mountains.
Four of us this year. Sadly Peter missed his first ever annual tramp due to house repairs. Graeme too - almost didn't attend due to urgent appendix surgery, but with the promise from the rest of us that we would carry his heavy gear, he managed to come along - and maintain his perfect annual attendance, now the only one with a 100% record.
This year we drove down to Lake Ohau and with the 4WD managed to almost get up the Hopkins riverbed to the Huxley River. A pretty laid back trip this year - up as far as Broderick Pass - good food, good company, happy hours, etc - and the final night spent at Ohau Lodge, a dated but very pleasant place with views to die for, excellent food, good bar, and comfy beds.
The 40th anniversary is only a few years away, we'll have to start planning something special. In the meantime a book is being prepared. Graeme has written up all the journeys and I've recorded most of them with my camera.
Below are a few images from this year's tramp.......................