I have finalised my dates for the next photo tour to Oman - hotels booked, vehicles sorted, and people paying their deposits and ensuring a place on the tour already.
If you know of anyone who might be interested, share this with them. 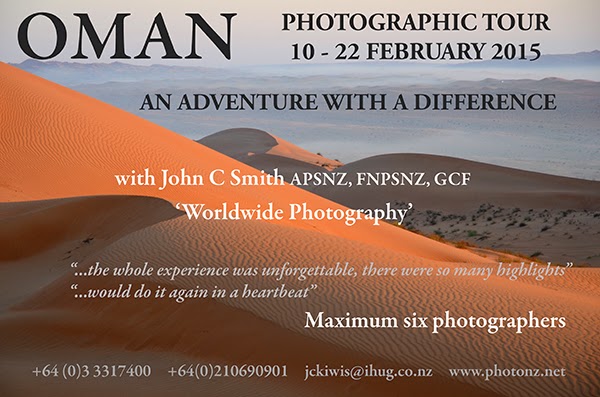 Posted by REFOCUSED at 11:12 AM No comments:

Does anyone read these blogs?
Maybe a few!!
Does anyone understand Blog set-up?
It does many weird things, most of which appear to be completely beyond my control - and I cannot fathom the nuances of this wonderful technology.
Help - please!!
Posted by REFOCUSED at 12:05 PM No comments:

Spring is in the Air


As well as the annual tramp with 'the lads' (most of us in our 60s now - one, heaven forbid, as of January now 70, but the apprentice is only in his early 50s!) we also like to take the spring air for 2-3 days before Christmas each year.
This year had to be early for me as I was heading back to the Middle East early December.
No one had been up the Crow Valley (Arthur's Pass area) for years, so that got the nod of approval from the team. Due to commitments all round, it was only to be a single night out.

A brief sojourn into the hills, but great company - as always. Our batteries were recharged and the world's issues were solved over a few drams.
I had not visited the Crow Valley for ~30+ years. The last visit, if my memory serves me right, was with my elder daughter, Rachael about the time she started high school! I used to visit this area regularly - usually traversing over from Avalanche Peak, frequently as a day trip. One of the lads did gift me the door bolt of the old Crow Hut when it was demolished - it sits here on my shelf today!
All the images posted here (6 of them) were all captured on my iPhone and nothing has been done to them - apart from making them square and downsizing them. I'll soon convince myself that I don't need to lug my big DSLR and lenses with me every trip - technology is improving unabated, and my ageing body is looking for any excuse to lighten up!!

Having just posted the Auckland 'Aquatramp' blog before it became a blur in my mind, I'd thought I'd now work my way backwards towards the middle of last year in an endeavour to catch up with myself - a dangerous challenge.
So here goes............but please don't hold your breath. This too could take weeks - if not months!
Posted by REFOCUSED at 5:11 PM No comments:

Since 1981, a group of 4-5 of us keen outdoor lovers have got together each year for our annual tramp together. 34 years in total so far - and two of the group have participated in every one. an admiral record. I've missed a few due to being overseas or health. This year, after a few years of cajoling by Richard, we finally accepted his offer of an aquatramp - fly up to Auckland and spend a week of island hopping around the Hauraki Gulf on his yacht - a 47 foot Bavaria. 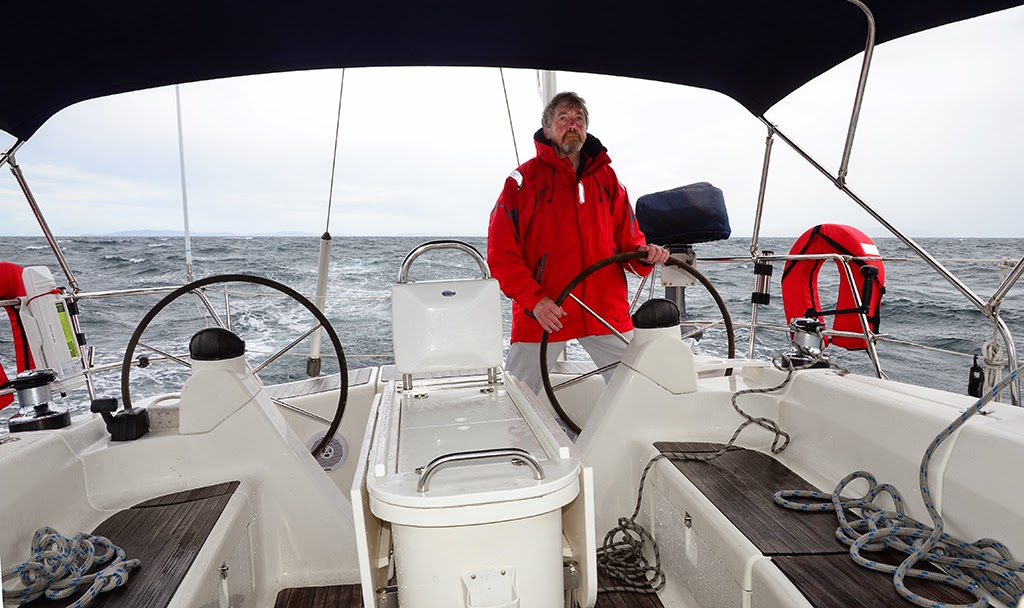 Captain Richard at the helm

Three of us flew up to Auckland at the beginning of March this year, were met by Richard at the airport, whisked away to the local supermarket for supplies, then on down to the boat at Westhaven Marina to carefully store everything away. At 3pm we were gliding down the Waitemata Harbour and away from the city. What a magnificent vista!
"So where are we heading for today Richard?" we three novice sailors bleated. "Great Barrier Island" came the reply from Captain Richard. "But we won't arrive until well after dark. You will love the view when you wake up in the morning".
As dusk approached - and the island slowly loomed larger - so too did the wind - upwards of 40 knots at times, with a flowing sea and waves that looked menacing large to us novice sailors.
Alas, just on dusk, us three novices started speaking sternly into the bottom of Richard's blue bucket - some of us more sternly than others!! Richard's crew of four were effectively now down to one - himself. Being the careful prudent sailor that he is, he erred on the side of caution and turned about within a few hundred metres of the small islands off Great Barrier, but not before damaging a little equipment in the process. We finally slipped into Mansion house Bay on Kawau Island at 4 am. Richard had been at the helm for 13 hours without a break. The four of us were finally able to crawl into our sleeping bags and put the wretched blue bucket away! Not the best of starts to our aquatramp. 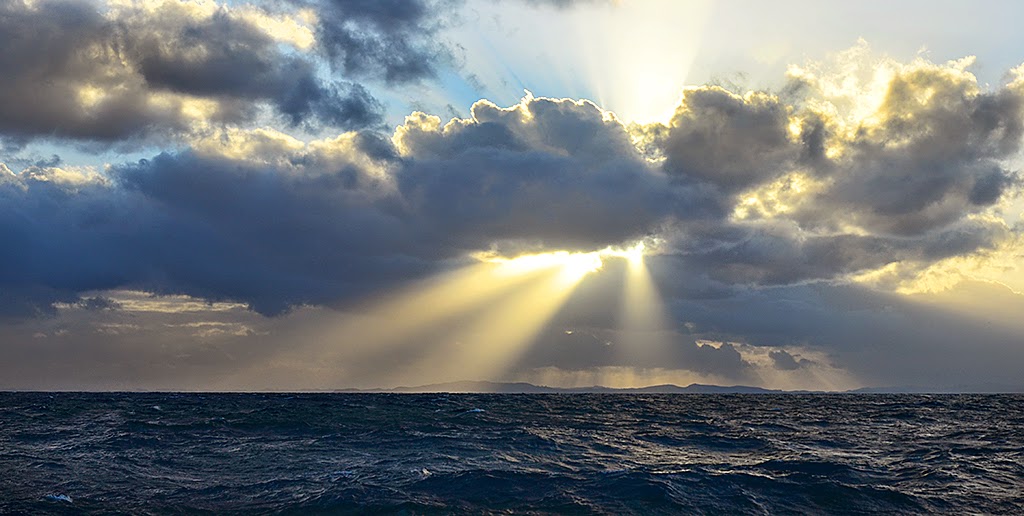 Day One - leaving the mainland behind

Thankfully the remaining days were calmer - so calm some days that we were reduced to motor sailing. We trekked around Kawau Island, then headed back to Great Barrier Island, passing close by Little Barrier Island en route - an island that it is prohibited to land on without permission.

Entering Great Barrier Island's Fitzroy Harbour via the 'Man o' War' passage was a great experience and entry into another world. Here we spent three nights. We did tramp! We rowed ashore and climbed up to the top of Mt Hobson (~620 metres) - a mountain I have more respect for now. I was anticipating a 'hands in pocket' wander for half an hour. But no - it took three and a half hours of mostly uphill, much of which was wooden steps to protect the petrol bird nesting sites - not a natural process at all and a good workout for calves, hamstrings, and quads!!

Back on the boat, we ventured out to Mokohinau Islands - until now I'd never heard of them - even further out than Great Barrier. This time under motor as there was no wind at all - dead flat seas. What lovely islands. On the way back to Great Barrier, we were accompanied briefly by a small pod of dolphins.

On returning to Great Barrier we discovered we were in good company - the 'Spirit of New Zealand' was anchored in Port Fitzroy. Next day we departed Great Barrier to head back to Auckland, via Waiheke Island - but not before visiting a gannet colony on a small island just outside the 'Man o' War' passage.

And so the aquatramp ended - as it began - gliding past the Auckland waterfront to our marina and the end of a wonderful eight day adventure. Hopefully this won't be the last such adventure. Thank you Richard - and Graeme and Peter.
Oh, and one last thing - my god, there's a lot of money up in Auckland - both on land and water!
Posted by REFOCUSED at 9:38 PM No comments: