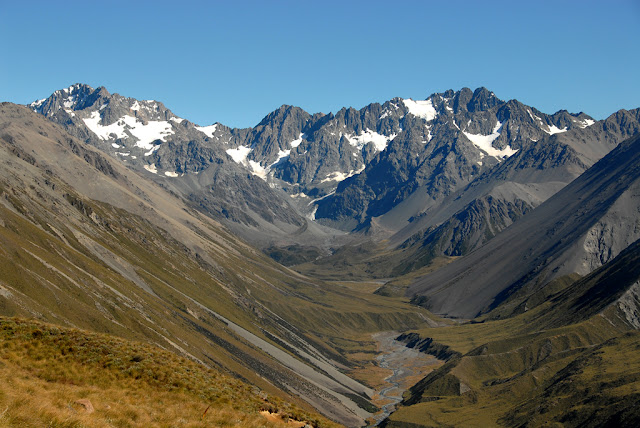 This image may have been in a previous post, but who cares - it would have been a few years ago!
I am currently preparing an exhibition of my images for a cafe in the 'new' city - 14 all up.
In an endeavour to be frugal and recycle some of my unsold framed images, I have taken the matted images out of old frames in order to reuse the frame. One such image was this one of the Arrowsmith Range looking up the Cameron River.
This country brings back so many good memories. It is a good solid 5-6 hour walk from the carpark up to the CMC's Cameron hut.
One of the first trips was with my big brother and his longtime climbing friend Jim (and their wives). Us three guys attempted Mt Couloir - this was one of my first climbs with crampons - and it showed. High up in the couloir I hadn't taken a dozen steps when I tripped on my crampons. The acceleration down the couloir was fast, but Jim held me with a good belay.
The next trip up the valley was with a good climbing mate, Dennis. We were both still teenagers - just from memory. I recall I met Chris at the same time so we must have been. I have photographic proof! Dennis was a newly trained school teacher who had had a sudden rush of whatever to his brain and decided he needed a career change into the army. I vividly recall sitting atop an Arrowsmith peak pleading with him not to join up. But to no avail - join up he did and soon after he became Rachael's godfather. We then departed NZ to work overseas. Eighteen months later I received an aerogram from my mother telling me that Dennis had been killed in Singapore when an army airdrop landed on him.
The last time I was up the valley - I am ashamed to say - was in 1986. At 0400 one starry morning we all stood outside the hut and watched Halley's Comet - the best view I ever had of it.
Whilst I may never climb any of those big mountains again, the Cameron Valley is still a strong attraction. One day soon...........................maybe!
Oh and yes - my exhibition will be at The Green Room cafe in Princess St, right next to Jason Gunn's Whitebait TV. Come and enjoy a caffeine fix.
Posted by REFOCUSED at 8:25 PM No comments:

I have worked some more on the image in the previous blog and have now come up with this photographic poster version. It is all in black and white - and gray - to reflect the weather of the day and the sombre occasion.

Poster size is 1010mm x 380mm and is available for sale as is or framed. If you are interested please contact me jckiwis@ihug.co.nz
Posted by REFOCUSED at 12:13 PM No comments:

Sunday 5th August was a busy day - a memorable day in fact.
At 0800 this day, New Zealand was to witness it's first ever building implosion. I'm not one for destruction but this, I felt, was worthy of recording. Yet another of the city's buildings to go - on this occasion in dramatic fashion.
On the Saturday I rigged up my tripod to securely sit atop my 2 metre ladder. Despite the media reports warning the local populace not to go into the city to view - rather watch it on TV later - a real Tui 'Yeah Right' moment. Thousands converged into Latimer Square for the spectacle. And Chris and I were there - and most of my photographic friends too. The camera set up on top of the rig with me perched way up there too. A few test shots to check the exposure etc and all was ready. No doubt we would hear a warning siren for such a dangerous mission. Alas at the appointed moment a faint dribble of sound drifted across the park, unheard by the majority of spectators (much like the new tsunami warning sirens recently installed along the coastline).
The initial explosion was frightening to say the least - almost every orifice relaxed instantly! Deafening it certainly was. The adrenaline surge was instant. I managed to fine the shutter button and hung on as the building shook, windows blew out, and after a few seconds it sagged and began its swift journey to the ground.
We cried.
Posted by REFOCUSED at 9:11 AM No comments: