I've been tramping and mountaineering for most of my life, frequently well off the beaten track. Sometimes you must simply follow your instinct for direction finding. On other occasions a party has been before you and left a cairn to indicate the route. Sometimes they are easy to follow - sometimes not. Finding one when you think you have got lost can be a huge relief after a lengthy period of uncertainty. 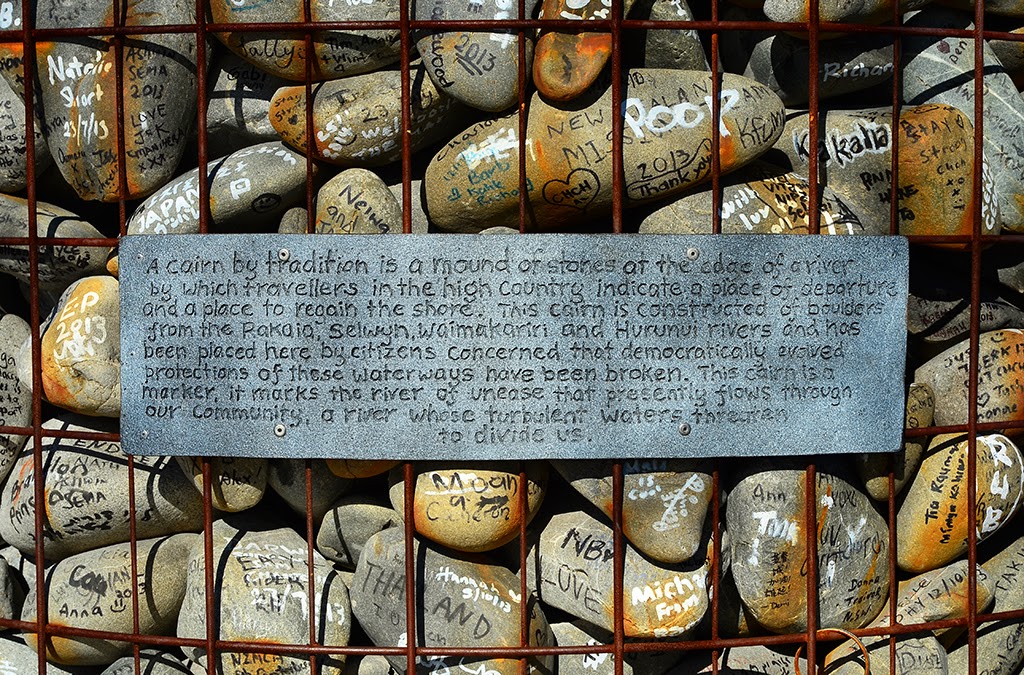 This image is a cairn with a difference - set up in Cathedral Square in what was once the heart of our city - speaks for itself.
Posted by REFOCUSED at 8:23 AM No comments:

I've banged on about this subject on three previous occasions - and I'm guessing this won't be the last.
I've grown to like and appreciate street art and good graffiti over the past few years. I think some of it is very clever. One of the best spots locally was the old Canterbury Sales yards and I've spent many hours on my own and with fellow photographers capturing the ever changing art there. Sadly it has recently gone - the site is clear.
I was incensed last week when I discovered this in town. 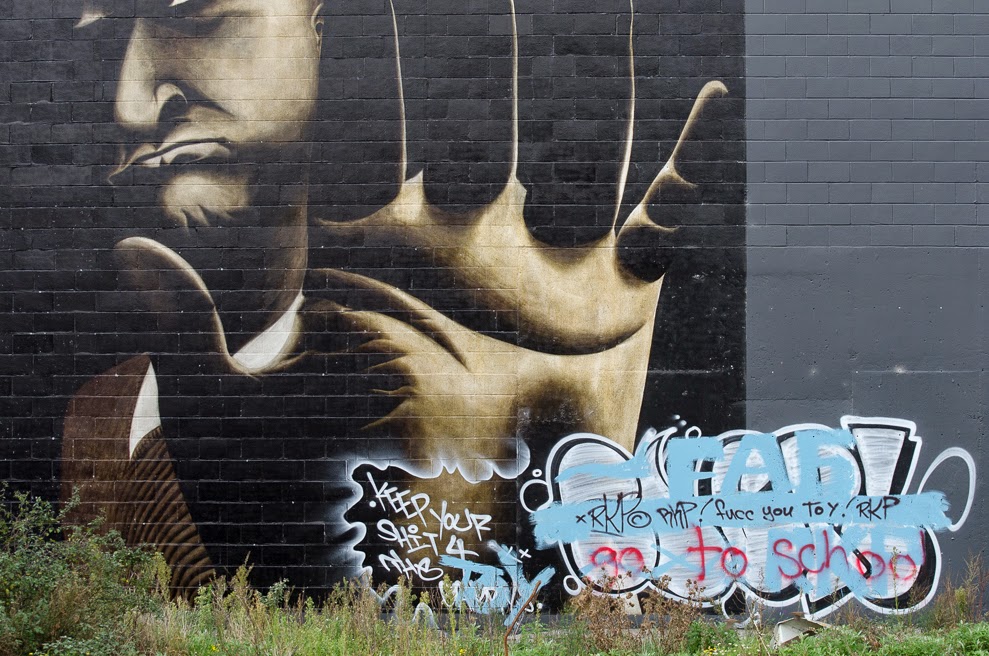 I had always understood that 'artists' respected each others work - particularly when it came to street art. How naive was I!! The tagging in the lower right was obviously deliberate - the tagger set out to ruin the street art already there. There was a huge blank wall further to the right. Moronic!
Posted by REFOCUSED at 8:13 AM No comments:

I have a big brother.
I also have a big sister.
I love them both immensely.
My big brother who lives in Hamilton frequents Christchurch occasionally to see family and friends. On a recent inner city trip he spied the remains of the Odeon Theatre.
"Did that used to be the St James Theatre" he asked.
On researching I announced that, yes indeed, it did.
"I can see the seats where we sat when Dad took me to hear Ed Hillary and George Lowe speak on their world lecture tour in 1954 after the successful first ascent of Mt Everest" he said.

"Grey seats on left. Three down from top. Second and third seats from aisle"!!
Big brother went on to become a very proficient mountaineer, and climbed many times with Ed.
I hope he expands on this story in his blog - http://barrysinparadise.blogspot.co.nz

My big brother is also an excellent artist in his retirement, specialising mainly in woodcuts. I am a great fan of his - you only have to see my walls. One of his works that I particularly like is titled "Stretching the Light (after Hotere)" - a 2009 effort. On touring the inner city for the umpteenth time with visitors, I spied this on a wall which kind of reminded me of big brother's artwork. He will understand what I mean.

Posted by REFOCUSED at 8:12 PM No comments:

We live in Majestic Lane, a small private lane of only 8 houses in suburban Christchurch at the foot of the Port Hills.
Go back 14 years - almost.
I'd already departed Saudi Arabia and wandered the world for ~16 months, and was settled back into life in NZ. Chris completed her 'tour of duty' in mid 2000 and she too returned to NZ. We were now ready to purchase another house. Initially Chris was not working and I was back running the department at Christchurch Hospital, so it fell to her to do the donkey work of searching according to our rigorous list of 'must haves'. I looked at two properties with her - one north city, the other south city. After the latter visit, on a whim, I told her of a little lane I'd seen previously on my own whilst walking. There in the lane was the 7th completed house with a small handwritten mobile number number on the fence.
"Shall we call it" said Chris, looking eagerly through the window - it's probably way out of our price range anyway.
"I can't  live in a lane called Majestic Lane - it's too pretentious" I replied.
"We can at least call" she prompted.
To keep the story short, I did call. The house (brand new) had been on the market, but had been taken off and the builder was about to move his family in.
"Why, are you interested?" said the builder (his first mistake).
"I could have been if it had still be on the market" I replied.
"Would you like to have a look inside" said he (his second mistake).
In a last ditch effort to complete this story, we did look inside, we learned the story of how the lane got its name, we negotiated privately and we bought a house!
So to the name.................
The land the 8 houses in the lane are built on used to belong to the Bible College. They outgrew their buildings on the site and they negotiated with the Christchurch City Council to swap the land here for the Majestic Theatre in the central city (possibly some $$ changed hands also - who knows).
"So what" I hear you say!
Well, as it happens, on our first date I took Chris to see a movie and it was at the Majestic Theatre. I booked seats in the back row of the lounge area upstairs (as you did when you were a young lad trying to impress your girl on first date), got dressed up in my best garb - tie and all (I won't embarrass Chris by describing her outfit - that's her domain), and off we went.
And, oh yes.......... what was the movie we saw?
"The Odd Couple"
The rest is history!!

Which brings me to end of this very long winded story. In the previous blog, I spoke of the demise of Millers. Yes, on the same day another crew were starting on the demolition of the Majestic Theatre - despite loud protestations from the heritage people. Apparently it stands in the way of future plans for this city.

Posted by REFOCUSED at 7:44 PM No comments:

I grew up in Christchurch - apart from the first few years.
I had a great Mum with the biggest and warmest heart you could imagine. We led a pretty humble existence in those days - Mum and Dad, and my brother and sister. But we managed somehow - largely thanks to Mum's wisdom and perseverance - much of it unappreciated at the time unfortunately.
Each week, Mum used to take me on the tram or the bus into town. Invariably we would go to Millers in Tuam St, where I would tentatively play on the escalator (I recently learned it was the first escalator in NZ - 1930s). Mum would buy material to make clothes for herself or us kids - and she would look longingly at the hats, gloves, and bags, etc that she could not afford. On rare occasions Mum would take me up to the cafeteria (no cafes then!) for a bun and a cup of tea - no doubt depriving herself of some needed item to do so. I thought it was a great event!
I also recall the vacuum pipes - the staff member serving you would put your money together with the sales docket into a wee 'rocket' which was put into the vacuum pipe - and whoosh, off it went (the 'ether' of the 1950s!! - no plastic cards then - totally cash). You would then twiddle your thumbs for 5 minutes, then lo and behold, back it came with your receipt and change. Not a bad system in hindsight!!
Unfortunately Millers succumbed to the 'Made in China' times. The building became the headquarters for the Christchurch City Council for many years. Eventually they too moved on, moving into new premises in the central City, leaving the building and its history lonely and unloved.
But then after a few months of emptiness came 22 February 2011 - earthquake day.
Now, in May 2014, the building is being demolished. The physical structure will soon be gone and yet another car park will appear, along with the hundreds of other vacant sites - but the memories will still be there. Bless you Mum. 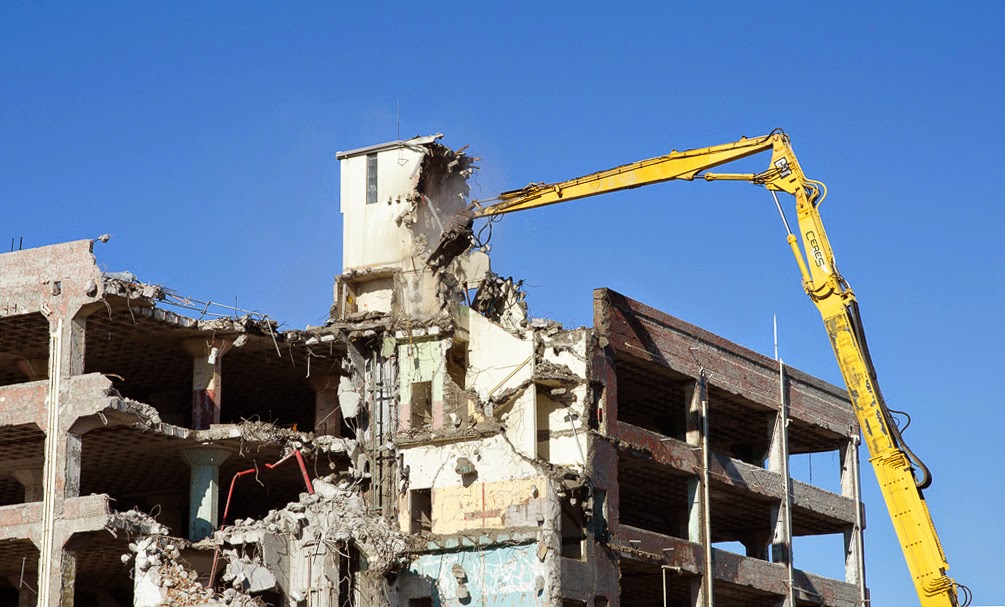 Posted by REFOCUSED at 9:36 AM No comments:

A View to Warm the Heart

I love Lyttelton Harbour. I find it good for the soul. Looking down the harbour always relaxes me and lifts my heart. One of my favourite spots - a place I invite only a few special people to share with me - is Coopers Knob. The highest point of the port hills surrounding the city. 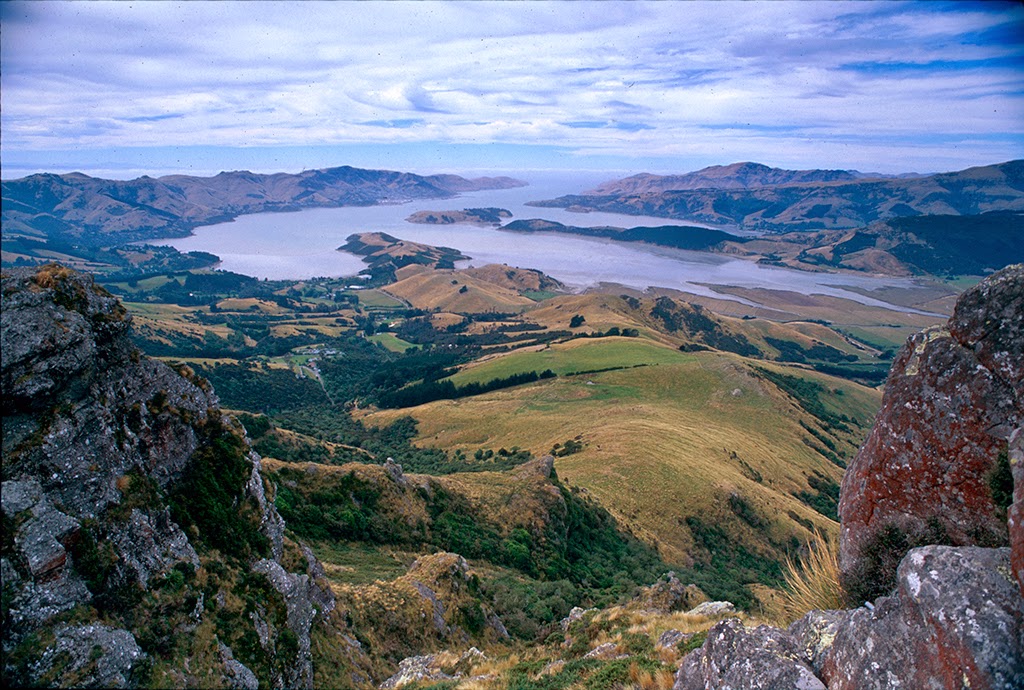 This image from Coopers Knob- titled 'Wedding Vista' - was captured at the exact time Juliet was getting married in Melbourne ~14 years ago. Given less than 48 hours notice, none of the family were present, but I did clamber up to my favourite thinking spot with a bottle of vino to celebrate her union from afar through weepy eyes. Unfortunately the union did not survive and thus this image is soured in my mind.
However, it has not diminished my love of the harbour.
10 days ago I walked around the Allandale - Governor's Bay waterfront track - the intent being to help a photographic friend to complete a project she was working on. The day was lovely, the lighting bang on for the task in hand (a geological impressionism). Behind me, looking down the harbour was this view............ helped by the low tide.

This image was taken with my zoom lens set at the wider end of its limits, and thus pushing everything seemingly away into the distance. Our eyes, however, do not see it this way - we see life at about the same as a 50mm lens (in 35mm camera terms). So......... turning the camera through 90 degrees, I captured a series of images at the 50mm setting, sweeping from left to right, and overlapping by a third - 17 images in total. Now, thanks to the newer versions of Photoshop, these can easily and quickly be merged together to create a lovely panorama.

It does look the same here, but I've had to minimise it so much to allow it to fit on here. The file size is 325MB and a print with a height of 40cms is 2.5 metres wide!! A good wallpaper perhaps??


Posted by REFOCUSED at 9:14 AM No comments: